As Buybuy Baby Craters, Babies R Us Stages A Comeback 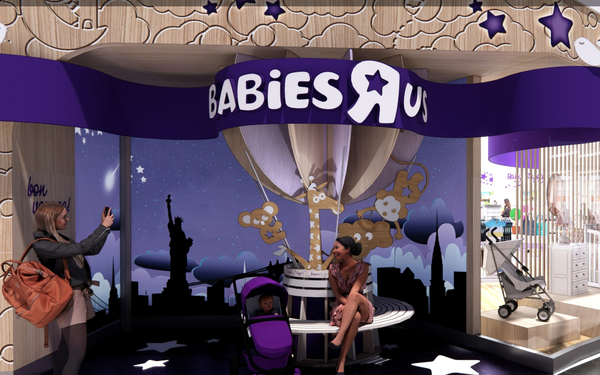 Between America’s shrinking birthrate and the steady rise of ecommerce, times have been hard for brick-and-mortar retailers. But Babies R Us, which folded in 2018 as part of the Toys R Us bankruptcy, plans to open a store in New Jersey this summer, housed in the American Dream mall. And it says the launch is just the beginning of a national rollout.

Parent WHP Global Brands, which also owns Toys R Us, says the new store will have interactive experiences that make in-person shopping worthwhile. There will be a Stroller Test Track, for example, as well as a photo-op station for parents to announce their new arrival, a nursery design center and a Wishing Tree for friends and family to share messages.

The news follows the successful revival of Toys R Us, which has opened in every Macy’s.

It also comes as Bed Bath & Beyond, parent of buybuy Baby, continues to struggle, with observers predicting it will go bankrupt soon.

Bed Bath & Beyond released quarterly results that shocked investors, who had already been expecting the worst. Total sales plunged 33% to $1.26 billion. And sales at buybuy Baby, which some believed was better-performing and might benefit from spinning off into its own company, didn’t do much better, falling in the 20% range.

Profit margins also suffered since many of those sales included marked-down inventory, especially of its owned brands.

The company owns 137 buybuy Baby stores, although it recently added six to its growing list of store closures.

“Bankruptcy is likely,” writes Seth Basham, an analyst who follows Bed Bath & Beyond for Wedbush Securities. “We now forecast the company running out of liquidity in 2023, making a restructuring scenario in bankruptcy in the coming weeks far more likely.”

For Babies R Us, initial marketing plans include content and resources for expectant parents on its digital channels, including a video feature from actress and first-time mother-to-be Gina (“Jane the Virgin”) Rodriguez.

Babies R Us operates digital sites in many countries and is a component of Toys R Us locations.

But much has changed since 2018 and the collapse of freestanding Babies R Us stores. There are fewer babies. The birth rate, which has been declining steadily since the recession of 2008, hit a historic low in 2020 of 56 live births per 1,000 women, reports Pew, down 16% in a decade. And 43 states recorded their lowest fertility rates in three decades.

Those discouraging stats are not likely to change soon. Pew also reports that 44% of non-parents between 18 and 49 say they never plan to have children, compared to 37% in 2018.

And for those choosing parenthood, retailers like Target, with its Cloud Island brand, Walmart, and Amazon have sharpened their baby offerings.