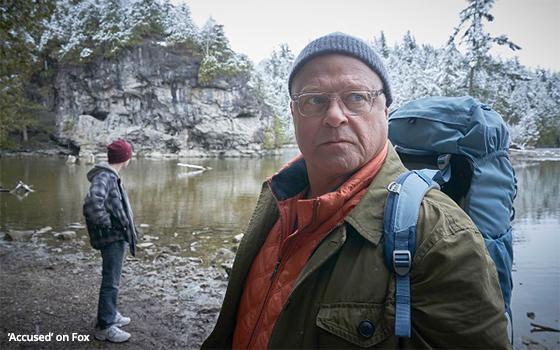 A new drama on Fox was so gut-wrenching to preview in advance of its premiere this Sunday that it was difficult to finish watching the first episode all the way to its conclusion.

The show, titled "Accused," once again raises the question of what qualifies as entertainment in a world where the preponderance of TV shows and movies today traffic in sad stories of human misery and grief.

Adding to this conundrum is the fact that the production of today’s television dramas is so sophisticated, largely due to the advanced tools available to filmmakers, but also to the abilities of today’s actors, directors, writers and all the rest.

"Accused" is a case in point. By all measures, this is a great show, meticulously well-made, top-notch all around, great stories, writing, acting, casting -- you name it.

The show is a one-hour drama with a different self-contained story with new characters and situations every week.

The premiere is titled "Scott’s Story" (indeed, all of the episodes’ titles are styled this way). “Scott” is a neurosurgeon (played by Michael Chiklis, pictured above) who, along with this wife (Jill Hennessy), is coping with a very difficult situation, a teenage son who they fear may explode in violence at any moment.

It is Scott who is the "accused" referenced in the title, but we do not learn what he has been accused of until the final portions of the hour.

Until then, it is possible to conjure up a couple of scenarios in which he might be accused of a crime.

This is one of the artful aspects of the way this show tells its story -- revealing just a little of it at a time (unaided by a narrator, thank heaven), and usually surprising us with something we did not expect at almost every turn.

Even the way the episode ends comes as a surprise -- at least, it did to me. I did make it to the end.

Chiklis, Hennessy and young Oakes Fegley as their troubled son all put in superlative performances. And so does everybody else.

So what’s the problem? That brings us back to the "entertainment" question posed earlier. TV is awash in intense, sad dramas, but to me, the intensity of this one is on a whole 'nother level.

The show’s high quality plays a role in that. The elements of the show’s production cited above combine to really allow a viewer to live inside each character and understand the terrible challenges they face.

But that’s just it. Sharing the inner life of people going through a situation as horrendous as the one depicted in Episode One of “Accused” takes more fortitude than I care to expend to watch TV.

That will be especially true for millions this Sunday, when the premiere of “Accused” is scheduled for just after this Sunday’s NFL playoff game on Fox between the Cowboys and the 49ers starting at 6:30 p.m. (eastern).

Watching an exciting NFL playoff game on a cold winter night in January is a joyous occasion. For all of its qualities, “Accused” is the complete opposite of that.