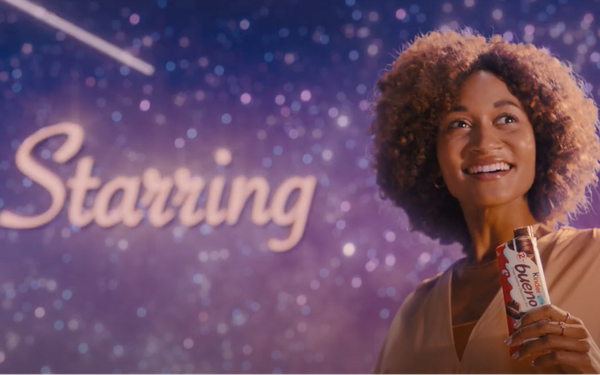 Levity and levitation are the main ingredients in the latest iteration of the “Life Gets Bueno” creative platform for Kinder Bueno chocolate bars.

A new commercial from the Publicis agency titled “Double Feature” is designed to show how everyday experiences can transition from ordinary to extraordinary with the help of a multisensory snack.

As the spot opens, three frustrated people are stuck in a highway traffic jam until one of them opens a Kinder Bueno two-pack and the voiceover says “It’s crispy, it’s creamy. Get ready for it.”

Then an overhead sign bearing the words “A Life Gets Bueno Film” materializes, and the snacker floats upward through the car’s sunroof—becoming the star of the “film,” to the amazement of other motorists.

The campaign’s target audience is men and women ages 18-39, according to Shalini Stansberry, vice president of marketing at Kinder Snacking.

“In terms of their mindsets, they’re looking to live their lives to the fullest,” Stansberry tells Marketing Daily. “They’re driven, confident and curious and look to the bright side of most situations.”

The levity and levitation elements are reminiscent of the spot for Kinder Bueno that ran during the Oscars telecast in February of 2020—a few months after the chocolate bar was introduced to the United States by Ferrero North America.

In that 30-second “Life Gets Bueno” spot, a female shopper samples a Kinder Bueno before floating upward in slow motion as the voiceover says, “It’s not your average chocolate bar.”