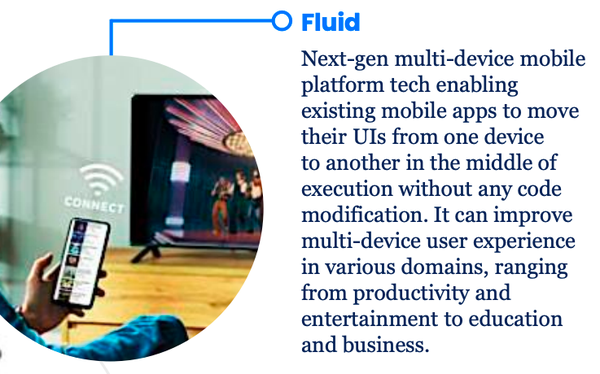 Reading through an excellent GroupM report recapping some of the major consumer -- and business -- electronics innovations showcased at the recent CES conference, it dawned on me that we should stop calling mobile media "mobile media." It should be called "fluid media."

At least that's the way the report's author, Whitney Fishman, sees the next generation of "multidevice mobile platform tech."

Fishman, who is GroupM North America's group director of consumer insights and innovation, writes that this next-generation will enable conventional mobile apps to "move their UIs from one device to another in the middle of execution, without any code modification," creating what people in the ad industry used to describe as "seamless," or "frictionless" media experiences, but which may better be described as fluid, because, well, I like liquid media metaphors.

Seems like a natural evolution to me, because, well, who wants to be interrupted with they're engaged in a media experience, just because they moved from one device to another?

My colleague Laurie Sullivan recently wrote a column about a similar idea Google is working on explicitly for audio experiences.

The technology, she wrote, is a win/win for consumers and advertisers. For consumers, it will enable people to "jump from one device to the next as they move throughout their day."

For advertisers, she added, "the feature should make it easier to target ads under privacy regulations."

I'm not 100% sure about that last part, but I do see the consumer and advertiser benefits of media experiences becoming more fluid overall, so long as individuals are opting into -- and controlling -- them.

Interestingly, GroupM's Fiishman notes there was an actual fluid media technology on display at CES: a connected sweat patch/mobile app she says is "designed for industrial athletes working on the frontlines of labor-intensive industries.