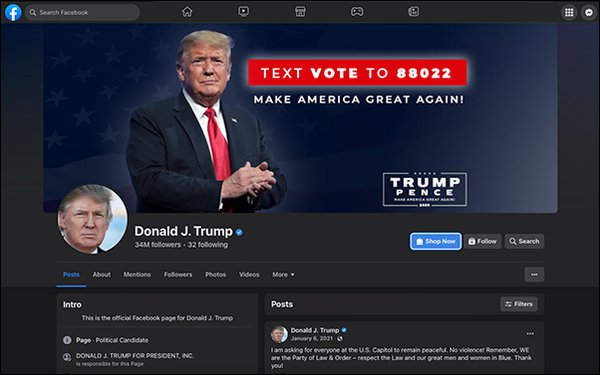 “We believe that the ban on President Trump’s account on Facebook has dramatically distorted and inhibited the public discourse,” a representative for Trump said in a letter to Meta, according to NBC News, which first reported on Trump's request for his account to be reinstated.

Meta's ban was for at least two years -- which means it is up for reconsideration this month. Trump reportedly is seeking a meeting with Meta to discuss the former president's "prompt reinstatement."

Twitter's new owner, Elon Musk, reversed the former president's ban in November, but he has yet to resume tweeting on the platform.

In July of 2021, Trump sued Twitter, YouTube and Meta, claiming that the companies violated the First Amendment by blocking his accounts.

The First Amendment prohibits the government from censoring speech, but doesn't typically apply when a private company suppresses speech.

But Trump's lawyers argued that his ban implicated the First Amendment on the theory that government officials coerced the companies into blocking his speech.

For instance, his complaint included allegations that when still a senator, Vice President Kamala Harris called on Twitter to suspend Trump's account, and that Rep. Nancy Pelosi (D-California) warned that tech companies' legal protections could be in jeopardy, unless they acted with more “responsibility.”

Last May, U.S. District Court Judge James Donato in the Northern District of California threw out the complaint against Twitter, ruling that Trump had not established the company was coerced by the government.

“The comments of a handful of elected officials are a far cry from a 'rule of decision for which the State is responsible,'” Dontao wrote. “Legislators are perfectly free to express opinions without being deemed the official voice of 'the State.' Government in our republic of elected representatives would be impossible otherwise.”

Trump appealed that decision to the 9th Circuit Court of Appeals. It's not yet clear how Musk's decision to reinstate the account will affect the legal proceedings.

Judges presiding over Trump's lawsuits against Meta and YouTube halted proceedings in those matters until the 9th Circuit issues a decision his case against Twitter.