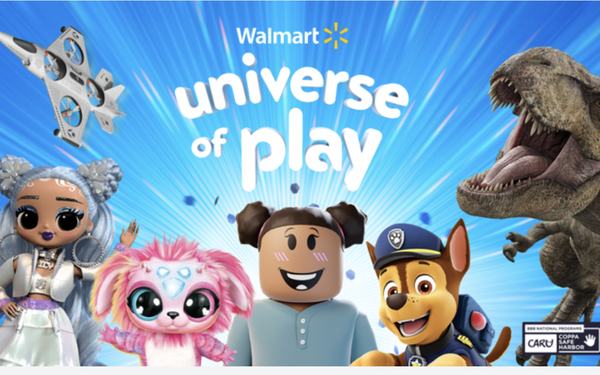 In a letter on Monday to CARU senior vice president Dona J. Fraser, TINA alleged that Walmart has failed to “clearly and conspicuously” disclose that its Universe of Play is an “advergame” in a manner that is “easily understood by its target audience of young children.”

“Roblox is one of the fastest growing and largest platforms in the metaverse and we know our customers are spending loads of time there,” the retailer’s CMO, William White, said at the time.

Within Universe of Play, “Young kids are encouraged to ‘collect the hottest toys’ and make a ‘wish list’ of toys that can then be purchased at Walmart,” TINA said in its letter to CARU.

“The lower end of the age range for several featured toys is three years old. As kids walk through the game, they are manipulated into unwrapping advertisements disguised as mystery gifts—with the gifts only revealed as ads after opening and even then, the disclosure appears in illegible fine print at the bottom of pop-up boxes.”

According to CARU’s Fraser, last month Walmart was approved to join the organization’s COPPA Safe Harbor after demonstrating that Universe of Play complies with the requirements of CARU and COPPA guidelines.

“Nevertheless, CARU takes the concerns expressed in the letter seriously and will work with Walmart—as we do all of our COPPA Safe Harbor participants—through ongoing reviews of this product to ensure they maintain compliance with COPPA and CARU’s guidelines,” Fraser tells Marketing Daily.

Joining TINA in the case are the consumer advocacy groups Fairplay, Center for Digital Democracy and the National Association of Consumer Advocates.

Marketing Daily reached out to Walmart, but had not heard back by deadline.