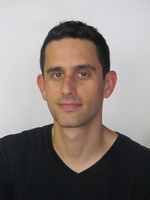 Assaf is a leading global thought leader, executive and entrepreneur in the marketing technology sector. He has over 15 years of experience in web-based e-commerce, digital advertising, and content platforms, building scalable products that allow marketers to generate the most impact across channels, devices and formats. As Chief Insights Officer at Amobee, Assaf helps brands leverage the most advanced, predictive data intelligence to analyze content and consumer engagement across the web, social, mobile and video, using Amobee’s Brand Intelligence technology to drive scalable results through actionable insights. Prior to joining Amobee, Assaf was the co-founder and COO of Kontera, a big data marketing technology provider, which was acquired by Amobee in 2014. Under his leadership, Kontera’s products and insights served some of the world’s largest and advertising solution providers. Prior to co-founding Kontera, Assaf served as a technical lead on building large scale e-commerce applications at iXL, Inc.