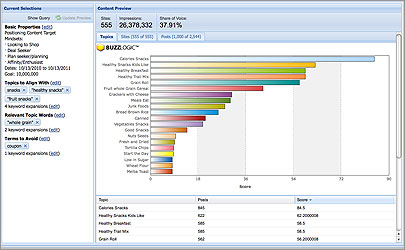 Social advertising firm BuzzLogic has launched an updated ad platform that targets advertising by analyzing the content of individual Web pages -- rather than site or domain level data -- then executes real-time bids and ad placements based on the most relevant inventory for a given campaign.

Dubbed Spectrum, the system indexes and ranks more than 1.5 billion pages and targets display ads based on topic, audience and social activity. Instead of cookies, the platform relies on cognitive analysis of relationships between certain keywords within a topic area.

For example, a CPG marketer seeking people who want healthy snacks might target online content where terms like “calories” and “snacks” “whole grain” or “healthy trail mix” appear. Conversely, an advertiser could use the dashboard to list terms to be avoided, such as “coupon,” if it wants to bypass audiences looking for deals and discounts.

Once ads are running, the Spectrum platform can be used to optimize campaigns on the fly and track results. Through the new offering, BuzzLogic boasts that it can help brands forge an “emotional connection” with consumers by seeding ads within the pages of the Web’s most influential blogs and sites. Whether placement determines an ad’s emotional resonance, or lack thereof, is debatable. The main idea is that the company’s technology is designed to deliver contextually relevant ads, now in real-time.

“We put the right ad in the right place at the right time,” said BuzzLogic CEO Dave Hills, reciting the holy grail of brand advertising. The new platform scores the content on thousands of pages on thousands of times in fractions of a second and then dynamically bids on the most relevant URLs. It also builds ad units customized for the page and audience while incorporating a brand’s ad creative.

BuzzLogic raised $7.8 million earlier this year, as it shifted from an online listening service to developing tools that allow marketers to advertise against the social data it tracks. To date, the San Francisco-based company has raised $28 million. BuzzLogic has put that capital to work, doubling the size of the company this year to 60 employees. Hills said revenue in 2011 will increase fourfold, although he declined to provide an actual dollar figure.

Last year, the company introduced the BuzzRoll display ad format, which allows blog readers to interact with and share everything from company blog content and Twitter feeds to video and Facebook applications. BuzzLogic’s advertising clients include brands such as Wal-Mart, Starbucks, Microsoft and American Express and agencies Digitas, MediaVest and 360i.