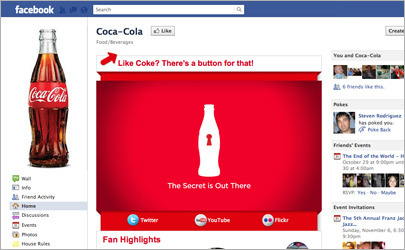 Coca-Cola ranks as the world's No. 1 brand in a Covario study focusing on the Facebook health of 100 leading advertisers. Hyundai, MTV, Disney and Bayer round out the top most liked and Wal-Mart rates best for engagement.

With the number of global Facebook users exceeding 750 million, its importance as an advertising medium is undeniable and growing fast, according to Covario, Inc., a provider of global search marketing services and technology solutions. Coke has a huge following on Facebook with more than 34 million fans, which is growing at a monthly rate of nearly 3%. The brand also has strong fan engagement, typically posting seven items a month on its page with each garnering more than 235 comments and nearly 1,750 "likes."

The study, which included the top 100 spending advertisers, examined both reach and engagement. They do not necessarily go hand-in-hand, says the study’s co-author Craig Macdonald, senior vice president and chief marketing officer of San Diego-based Covario. "Several advertisers -- Bayer and SC Johnson -- have built followers, but their engagement statistics are relatively low,” Macdonald says. “This is a huge branding opportunity for the firms." AT&T, Wal-Mart, Dr. Pepper and Fox have excellent engagement, but lower than expected “reach” statistics, he adds.

Wal-Mart ranks on top for overall engagement. The nation's largest retailer has huge engagement with its Facebook fans, receiving an average of 7,390 comments and 726 "likes" on every post, which far exceeds all of the other advertisers in the study.

Apple is the only company among the nation's top 100 advertisers that does not have an official Facebook page. The top Apple listing is a user page with 188,000 followers.

Having many outbound posts is not an optimization factor, according to the white paper from Covario. Less is more with Facebook and quality is what counts. Quality is measured by the number of "likes" and comments received per post. The best brands at engagement obtain upwards of 750 comments and 1,500 "likes" per post. There is no magic to the type of posts being run by successful brand advertisers. While promotions are rampant in advertiser posts, often posting generalized questions is more successful than hard promotions, according to the white paper.