Crackle Counts Down The Kills In Halloween Packaging 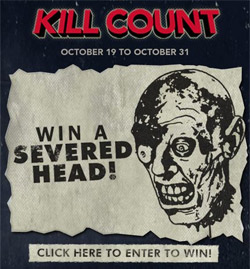 Since it ramped up its free ad-supported streaming film and TV service earlier this year across platforms, Sony’s Crackle has been developing a credible alternative to Netflix, Hulu, Amazon and the paid model. The company leveraged its “Seinfeld” episodes well in persistent promotion throughout the spring and  summer. And now it is working creatively with content packaging. A Halloween “Kill Count” promotion pulls together 30 horror titles -- both classic and downright risible -- to aggregates 300 film “kills” of various levels of gruesomeness. Whether it is just some garden-variety heads on spikes and neck-biting in the “Dracula” remake, or some serious axe-upside-the-head skull-splitting in more recent splatter fare, the Sony portal is offering viewers an opportunity to rate and discuss their favorite film kills.

Included in the “Kill Count” of 300 creative deaths are 92 stabbings, 56 lethal injections, 23 “fatal copulations,” 12 decapitations (only 12?), 8 defenestrations, 7 zombie face-slashings, 4 vehicular murders and 2 spontaneous combustions. (Only 2 spontaneous combustions in 300 horror flicks. Dickens’ “Bleak House” had one of those more than a century and a half ago. My lord, what has happened to American film?) Each movie gets a phony title card that counts the number of weird killings in each. There is a Facebook component involving a “13 Severed Heads in 13 Days” contest.

What is interesting about the Kill Count idea is how Sony is bringing traditional TV programming to the world of streaming media. Until recently, Netflix, Amazon, et. al. weren’t counting kills so much as counting videos -- who had the most elements in their library. Aside from recommendation engines, there wasn’t a lot of merchandising going on in these video repositories. It was as if the hosts handed you a search engine and tossed you into a video vault. “Here, kid, you got tens of thousands of video, you make something of it,” they seemed to say. The idea that these video streaming service should start crafting entertainment experiences, sculpting collections and building community interactivity around them is new and promising. Ultimately, once the wars over exclusivity rights and nabbing the latest “Mad Men’ or “24” episodes is over, adding sentient beings to the mix and actually programming experiences for subscribers has to be the next step.

That being said, Sony’s Kill Count promotion seems better in theory than in execution. Drop into the main site and you won’t even know it is going on. Even if you do drill down into the Collections area and find the Kill Count group, there is no discrete experience at hand. I am still trying to figure out if, how and where I can actually vote on favorite killings and where the promised community might be. Much of the activity appears to be routed to the Facebook presence, but even there it seems disorganized. One user on the Facebook wall even complained, “Crackle lied. It’s just another dumb collection.” If something wonderfully horrific is going on at Crackle, it seems pretty hard to find. Or is this the “trick” in trick or treat?