Bojangles Gets A Tad Surreal With New TV Spots 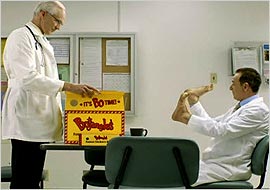 Getting viewers’ attention amid the plethora of often-frantic fast-food TV ads out there gets more difficult by the day. But a new campaign from Bojangles’ Restaurants isn’t likely to go unnoticed.

The most startling spot – a bit surreal, in a goofy kind of way -- shows one surgeon marveling to another about how the Bo Box is big enough to feed “the whole team,” and even includes tea. Surgeon #2, expecting to make an impression, reveals that he has surgically switched his hands with his feet. Surgeon #1, pointing to the box: “[But] this holds tea!”

The other two spots pivot on a “trophy wife” at a tailgating party and finding a “fountain of youth” in a home for seniors. The tailgating spot launched this month, and the “surgeons” and “fountain/seniors” ads will break in November and first-quarter 2012, respectively.

The TV ads are airing in regional broadcast, including Sunday/Sunday night and SEC football, plus prime-time shows such as “Two and a Half Men,” “NCIS,” “House,” “Bones,” “Dancing with the Stars” and “The X-Factor.” Bojangles, headquartered in Charlotte, has 500-plus locations in 10 states, primarily in the Southeast (Mississippi to Florida, Washington, D.C., and north to Pennsylvania).