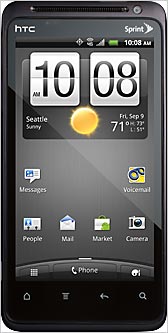 Two consumers filed a potential class-action lawsuit against HTC and AccuWeather.com over a weather app that comes bundled with smartphones and allegedly can be used to track users' locations.

Chad Goodman and Jon Olson allege in a lawsuit filed on Wednesday that the HTC EVO 3D and 4G phones are “defective” because they came with a preinstalled AccuWeather app that “caused the smartphones to function in undesirable ways.”

The consumers allege that the phones transmit users' approximate locations throughout the day, and also send “fine, GPS-based location data” -- accurate to within a few feet -- whenever users tap the AccuWeather widget.

The app can't be uninstalled or disabled, they allege.

“Defendants integrated an AccuWeather application into plaintiffs' HTC smartphones, ostensibly to make weather information conveniently available to plaintiffs,” they assert in their court papers, filed Wednesday in federal district court in Seattle. “In actuality, defendants have used and continue to use the application to track plaintiffs' exact geographic location for defendants' own purposes.”

Goodman, a resident of San Diego, Calif., and Olson, of Minneapolis, Minn., say that AccuWeather uses the location information in order to build profiles of users and send them targeted ads. They additionally say that the location data is sent to AccuWeather in an unencrypted format that doesn't meet security standards. They allege that the app violates consumer protection laws in California and Minnesota.

Goodman and Olson say they overpaid for their devices, on the theory that the phones would have cost less if they “had been labeled accurately and had contained adequate disclosures about their defects.”

The consumers say they're now entitled to a refund or a replacement phone, and are asking that HTC and AccuWeather.com purge any personal information they collected. The complaint doesn't specify how much Goodman and Olson paid for their phones. An AccuWeather.com spokesperson said the company hadn't yet been served with the lawsuit.

A spokesperson for HTC said the company hasn't yet had an opportunity to review the case.