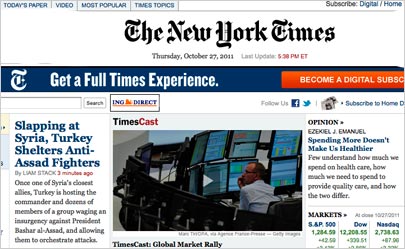 The New York Times has raised substantial circulation revenues from its online pay wall, but these are unlikely to make up for continuing losses on the print advertising side, according to Citigroup analyst Leo Kulp, who cited the company’s precarious finances in a note to investors, when he downgraded The New York Times Co. stock from “buy” to “neutral.”

Overall, the NYT paywall could bring in up to $75 million a year, according to Kulp -- who based his prediction on figures showing the NYT currently has 324,000 digital subscribers, including 100,000 heavy readers who received sponsored access for free courtesy of a promotional deal with Lincoln.

However, Kulp also calculates that NYT stands to lose another $80 million in print ad revenue this year versus last year, effectively canceling out the gains from digital sub fees.

Other estimates have pegged the NYT’s potential paywall revenues higher: Former Wall Street Journal publisher and Journalism Online founder L. Gordon Crovitz predicted that the NYT could take in up to $100 million a year from its online paywall.

Regardless of the actual amount, however, the company will be hard-pressed to make up for losses suffered on the print side since the middle of the last decade. From 2006 to 2010, NYTCO’s total revenues declined 27.4% from $3.29 billion to $2.39 billion, due mostly to a steep decline in advertising revenue, from $2.15 billion to $1.3 billion -- a 39.5% drop in just five years.