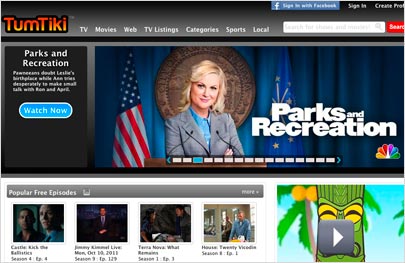 Whether consumers need or want another video site is highly debatable, but that’s not stopping telecom provider Frontier Communications from launching a new video library that boasts 700,000 titles via deals with Hulu, Amazon and other content providers.

The new site, TumTiki, is slated to debut today and is effectively operating as an affiliate site pulling content from other aggregators. As such, it’s not a competitor to the Hulus, Amazons and Netflixes of the world, but rather another hook into them and another way for many of those sites to make money.

To develop the site, Frontier partnered with online video services including Hulu, Amazon, 5min and Grab Networks to offer TV shows from networks including ABC, NBC, Fox, Food Network, Bravo, Oxygen, Comedy Central and TBS. The shows it pulls from Hulu will be carried for free via embeds, while TumTiki will offer Amazon’s rental titles. Under that deal, TumTiki receives a portion of the revenue Amazon generates on the transaction, explained Melinda White, executive VP of revenue development at Frontier Communications, which provides local and long-distance voice service, broadband Internet and digital television service to 27 states. As TumTiki grows its audience base, White said she expects the site to be ad supported.

Frontier is planning an extensive social media campaign to grow awareness of the site, as well as traditional marketing.

Still, the market seems flooded with content sites and hardly in need of a new one. White acknowledged that TumTiki is entering a crowded market but hopes the number of titles, coupled with the emphasis on local and original content as well as premium content, can help the company stand out.

“It’s about bringing everything to one simple destination,” she said. The name Tum is Turkish and means “whole” or “all,” while Tiki refers to representing idols, White said.