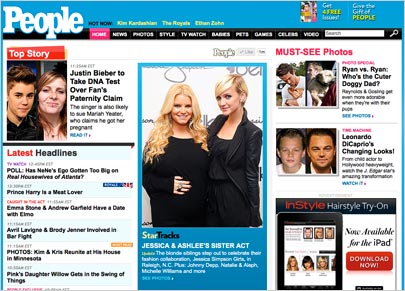 Magazine-branded social media platforms reach over one in ten American adults, according to Affinity's American Magazine Study, which found that 27.4 million consumers -- or 12.4% of the country's adult population -- access a magazine-branded social media site every month through computers or mobile devices. What's more, these consumers visited an average of three different magazine social platforms per month.

Of 170 magazines tracked by Affinity's AMS, 23 are attracting over one million visitors per month through their combined social media platforms, including Facebook, Twitter, and other social media destinations.

Not surprisingly, the most popular categories for magazine social networks were entertainment, gaming and sports. People magazine led the way with just under 3.2 million visitors to its various social media outlets; Game Informer was next with 2.44 million monthly visitors, followed by ESPN the Magazine in third place with 2.38 million monthly visitors.

The Affinity findings come not long after magazine publishers received a public scolding at the American Magazine Conference from L2 founder Scott Galloway, who warned that magazines are behind the curve when it comes to social media. Among other failings on the part of magazines, Galloway noted that major brands are accumulating more followers in social media than the magazines that advertise them. For example, he noted that Burberry has 8.6 million likes on Facebook, compared to 1.7 million for Vogue and 1.2 million for Cosmopolitan.