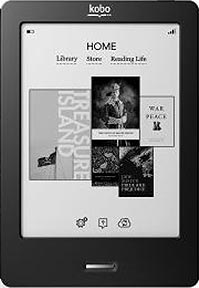 Even as the major e-reader players battle for the great middle of the $200-$250 color tablet market, the scuffle continues on the low end for cheap e-readers. Perennial also-ran in the reader race Kobo has introduced a Kobo Touch with Offers device that retails for $99.99 and carries ad messages.

"Kobo Touch with Offers is just like the Kobo Touch eReader, but includes valuable offers and sponsored screens in discrete places outside of the reading experience,” explains the product description at Kobo's sales site. The Kobo Touch without ads sells for $139.99.

Kobo is mimicking the model for low-end e-readers introduced by Amazon earlier this year with the Kindle with Special Offers that sold for less than the standard Kindle device. Kobo specifies that sponsor messages and promotions will appear when the device is in sleep mode and may also be present “on the bottom of your home screen." On the corresponding Kindle unit, the sponsors appear as screen savers when the unit is idle.

The Kobo unit has a 6-inch black-and-white e-ink display, so advertisers will be limited to a narrow range of 16 shades of grey. But because it is touch-enabled, it is conceivable that a home page banner ad could click through to an even richer ad experience.

Kobo Touch with Offers is competing against the recently price-reduced Amazon Kindle Touch with Special Offers, now at $99, and the Barnes and Noble Nook Simple Touch at $99. The low-end Nook distinguishes itself in the market by matching Kobo and Amazon's price point without including ads. Kobo is trying to position itself as an alternative to the big two booksellers with a larger library, greater access to free titles and an open model that customers read anything they buy from Kobo on any open reading device. The e-reader can access 2.2 million books in the Kobo library.

This will be a very big holiday season for e-readers, IDC projects. The company raised its prediction for 2011 sales from 16.2 million units to 27 million. In Q2 IDC estimated that Amazon controlled 51.7% of the market, with Barnes & Noble at 21.2%.

To fuel its positioning to gain more of that 27% of the market left by the big dogs, Kobo was acquired last week by Japanese e-retail services provider Rakuten. The combination should help Kobo keep up with Amazon and Barnes & Noble in product releases and distribute the brand in non-U.S. markets where these two e-retailers do not have the same market power. Kobo readers are sold at BestBuy, Target, Walmart and other mass-market retailers.