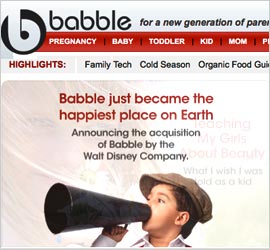 The deal is designed to strengthen Disney Interactive’s “moms and family” portfolio, which already offers various mommy-targeted content, as well as related tools and information.

With more than 3.9 million mom blogs in the US alone, Disney Interactive recognizes and values the important and powerful role moms have taken on in new media,” said Brooke Chaffin, SVP of Moms and Family at the Disney Interactive Media Group.

Since its debut in 2006, Babble has grown into a stable of some 200 bloggers, contributing daily to parenting topics including pregnancy, childcare, health, food, and family activities, as well as lifestyle topics such as home, fashion and family products.

According to Nielsen, Babble now attracts roughly 2.1 million monthly visitors, about 483,0000 of whom are women with children ages 2 to 17 years old.

Babble husband-and-wife co-founders Rufus Griscom and Alisa Volkman will join the Disney Interactive Media Group, while the company is expected to keep its headquarters in New York.

Credited with making most household purchase decisions -- and blogging up a storm -- moms have been coveted by online marketers and publishers alike. According to eMarketer, about 54% of the 32 million U.S. moms who go online every month still visit blogs.

It's not surprising, then, that Disney isn’t the first company to invest in the space.

For some, however, the mom market has proven elusive. Due to lackluster traffic growth, for example, Gannett recently shut down its own mommy network MomsLikeMe.