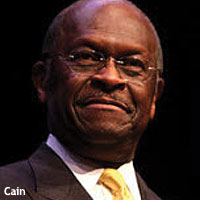 While it’s been 15 years since Herman Cain was the CEO of Godfather’s Pizza, that association appears to be influencing consumer perceptions of the chain along political party lines, reports YouGov BrandIndex.

Godfather’s’ brand health wasn’t so hot (regardless of the consumer’s political bent) prior to Cain’s May 2011 announcement that he was running for president.

BrandIndex’s overall Index scores (which average a company’s quality, value, reputation, impression, satisfaction and willingness to recommend scores) showed the chain pulling scores of just 3.9, 5.0 and 3.5 from Republicans, independents and Democrats, respectively, as of Jan. 3, 2011. In other words, perceptions were roughly equivalent across the three groups.

(The BrandIndex scores, compiled through daily interviews of 5,000 people, range from 100 to -100, and are compiled by subtracting negative feedback from positive, so a zero score would indicate equal positive and negative feedback.)

On May 20, when Cain announced his candidacy, the index score for Godfather’s shot up to 9.2 among Republicans, but declined to 3.0 among independents and to 2.7 among Democrats.

By Oct. 28 -- two days before the news broke that while Cain had been president/CEO of the National Restaurant Association in the late 90s, two female employees had alleged that he had sexually harassed them -- Republicans’ Godfather’s’ perception index score had jumped up to 15.5, independents’ was at 4.6, and Democrats’ had dropped well into negative territory (-8.9).

Since the allegations emerged, Republicans’ Godfather’s perception scores have barely budged: They were at 15.1 on both Nov. 11 and Nov. 14.

Independents’ scores for the chain hit their lowest point (1.8) on Nov. 7, shortly after the scandal broke (the high for this group was 9.6, on Oct. 6). However, by Nov. 14, independents’ score was nearly back to the group’s January, pre-Cain-candidacy level (4.3).

As for Democrats, recent, post-allegations scores for Godfather’s perceptions are not worse, but they’re still very much in negative territory:  -7.5 on Nov. 11 and -7.3 on Nov. 14.

Meanwhile, a lighthearted GQinterview with Cain that was conducted (in a non-Godfather’s pizza restaurant) before the allegations news, but newly posted on GQ.com, focuses heavily on Cain’s pizza platform.

Asked if he really eats as much pizza as people say he does, Cain said: “No, because I'm very particular about the pizza that I eat. Godfather's is still a premium-quality product, and I cannot always find that. It's got to be as good as Godfather's or I won't eat it.”

Cain also made it clear that he was in no way the originator of Godfather’s’ recipe for Chicago-style pizza (Willy Theisen originated the pizza/restaurant in 1973), but revealed that the chain conducts tests to determine the balance of ingredients that results in “a harmony of flavor.”

Demonstrating his now-famed flair for candor, Cain also verged into what many would no doubt label politically incorrect territory when asked what a man’s pizza preferences say about that individual. “The more toppings a man has on his pizza, I believe the more manly he is…because the more manly man is not afraid of abundance,” he said (with a laugh). He also ventured that “a manly man don’t want it piled high with vegetables! He would call that a sissy pizza.”

Asked if there are “Democratic pizzas and Republican pizzas,” Cain replied: “Nope, nope, nope. It's like a good idea: if it's great pizza, it transcends party affiliation, just like a good idea -- like 9-9-9.”

Sounds like those BrandIndex scores are going to bear more watching.