Dealing With Costumephobia In A Room Full Of 'Superheroes' 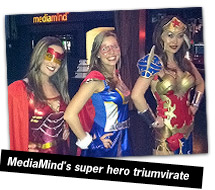 My stomach was turning as I stood outside of Crimson on Broadway, waiting for the doors to open for MediaMind’s 10th Annual Rich Media Awards. A few days earlier,MediaMind’s communications and media relations manager Alice Suh told me that it was superhero-themed. Worse – people would be in costumes. They had even hired superhero actors to perform. This would be great if I didn’t have an irrational fear of costumed people.

The line was already wrapped around the building when I arrived, and the doors didn’t open until 10 minutes after start time -- leav 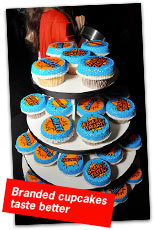 ing the waiting guests grumbling about needing food and drink. When the doors did open, a panic washed over me – everyone from MediaMind was either in full-blown superhero costumes or in a cape. Admittedly, I was kind of jealous of the capes 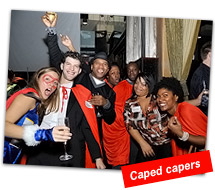 and even went on a mission to get one for myself so that I could fit into my Brooklyn neighborhood. I found Alice who was in an anime-style Wonder Woman costume which was surprisingly not scary. She gave me the rundown of the space – where the bars were, where the food would come out, the photo/phone booth where you could dress up and take pictures, the face painting station and the special journalist section. I went to the bar to grab a soda since I had a morning meeting, but I did get to check out the drink list. It looked pretty dangerous – drinks like Cryptonite and other comic-book-themed beverages – and I was glad not to be partaking in what was sure to be a wild night for some.

After I negotiated the bar area, I headed for the reserved journalist section – I’m not a fan of standing – and plopped down to take in the sights. The space was beautifully decorated with comic book thought bubbles everywhere – even on the custom made pillows that I contemplated sneaking out under my sweater. A cater-waiter came around with quesadillas with goat cheese toppings. Delicious!

The lights dimmed and a bunch of superheroes came out to act out a skit dealing with the awards, accompanied by AV. The crowd was entranced. Then strobe lights came on and the costumed actors started dancing around.

The awards themselves were short and sweet, although a deranged Batma 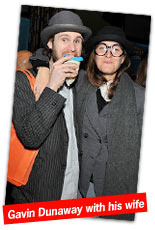 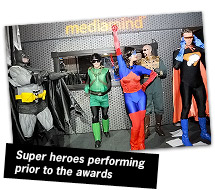 ge Customization. If you’re interested in checking out the winners, just go to http://www.mediamind.com/Awards2011/winners.html.

After the awards, I buzzed around and talked to a few people, including Gavin Dunaway of Adotas (he’s now at AdMonsters – this industry moves quickly!) and his wife. I also met some dancing MediaMind people who were in costumes, but between the blaring music and my costume panic, I didn’t take anything from the conversations. There’s always next year!

Thanks to MediaMind for providing the photos. As always, email carrie@mediapost.com if you want me to cover your party. Don’t forget to follow me on Twitter @carriecummings.

parties
1 comment about "Dealing With Costumephobia In A Room Full Of 'Superheroes'".
Check to receive email when comments are posted.
Next story loading