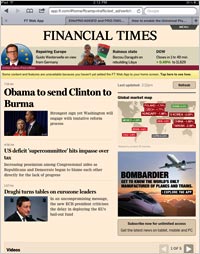 The Financial Times’ big bet against Apple’s in-app subscription model has paid off, to the tune of 1 million users served since its June launch. FT pulled its native iOS app from the Apple App Store shortly after launching a Web app version of the financial newspaper content.

By leveraging HTML5 functionality, FT was able to recreate much of the feature set available in the downloadable app, but kept the publication outside of Apple’s standard business model for publishers -- a 70% cut of revenue and little access to subscriber information.

Subscribers can use the same log in for the Web app to access premium content that they use at the main Web site. Upon entering the site for the first time, it installs some data onto the device and invites the user to create a branded icon on their home screen that looks and behaves much like a native app.

FT reports that the Web app is now responsible for 20% of FT.com’s overall page views and is the source of 15% of all new subscriptions coming direct from consumers. The FT Web app is accessible to both tablet and smartphone users. The company says people coming from these devices are among its most engaged: 2.5 times more likely to subscribe to the premium content and more active in giving feedback.

In an infographic outlining the key metrics for the FT Web app, the publisher says 45% of users from devices are saving the URL as an icon on their home page. Usage patterns are also distinct on devices. Traditional desktop access to the FT.com site is elevated evenly across business hours, but both smartphone and tablet access show a strong spike in the early morning (6:30 a.m. to 8:30), a trough during the workday, and a bubble of use again between 8 p.m and 11 p.m.

The Web app is available at app.ft.com. FT has been adding new content to the app in recent months, including special reports.