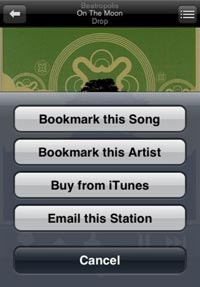 Despite growing competition, Internet radio service Pandora maintained strong growth in the third quarter while breaking even on the strength of rising ad and subscription sales.

The company Tuesday reported quarterly revenue of $75 million, twice the year-earlier total, and up from $67 million in the second quarter. The company posted a profit of $638,000, or break-even, on a per-share basis compared to a loss of $1.77 million, or 15 cents a share, a year ago. Excluding one-time charges, Pandora would have posted a profit of 2 cents a share.

Wall Street analysts had expected the company to report a loss of a penny per share, on revenue of $71.4 million in the third quarter. Advertising sales -- which accounts for the bulk of Pandora’s revenue --doubled year-over-year to $66 million in the quarter, while subscription and other revenue increased 80% to $9 million.

Roughly half of the company’s ad revenue came from its mobile properties, reflecting growing use of the service on mobile phones and other connected devices, where the majority of listening now takes place.

Total listening hours -- a key metric for Pandora -- reached approximately to 2.1 billion hours, double the amount from a year ago and up from 1.8 billion in the second quarter. The number of active users grew to 40 million in the quarter, up 65% from a year earlier, and almost 10% from the prior quarter.

Pandora’s estimated share of U.S. Internet radio grew to 66% from 53% in the year-earlier period, while its share of overall radio listening reached 4.3%, up from 2.1% a year ago. That still leaves the company plenty of room to grab more share in the $13 billion radio ad market overall.

Its stock has come under more pressure in recent weeks as a result of buzz around the launch of rival services, including Google’s online music download store and Nokia’s Mix Radio. After launching in the U.S. in July, Spotify continues to build its user base here, and radio giant Clear Channel has ramped up its iHeartRadio online music service.

But during Pandora’s conference call Tuesday, CEO Joe Kennedy emphasized that the company has not been slowed by heightened competition. “We have seen no impact on our growth trends from any of the activities of other digital music services,” he said. Kennedy also noted the company planned to continue building up its local radio ad sales force and take more share from terrestrial radio.

Going beyond PCs, mobile devices and car audio systems, Pandora earlier this month announced a deal with DMX to launch a commercial version of its service for stores, restaurants and doctors’ offices -- wherever background music can be piped in. Businesses can obtain Pandora’s customizable streams of music starting at $25 a month.

The company is also pushing into politics -- accepting political ads that target voters based on the ZIP code entered at registration. During the conference call, Pandora executives said they expect that business to really take off next year as the 2012 election gets into full swing.

Pandora’s fiscal fourth-quarter outlook calls for the company to go back in the red. It expects to lose between 2 cents and 4 cents a share, excluding one-time items, on revenue in a range of $80 million to $84 million. For the full year, it estimates losing between 2 cents and 5 cents a share on revenue of $273 million to $277 million. Shares closed Tuesday at $11.85, down from its July IPO price of $16 a share. The company’s shares were down slightly to about $11.50 in after-hours trading.