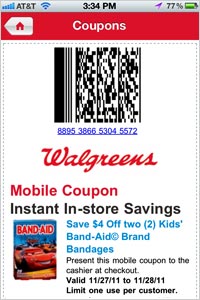 Drug store retailer Walgreens is offering holiday shoppers one of the largest mobile-only coupon programs to date from a major retailer. At more than 7,700 locations, Walgreens customers can bring their smartphones to the checkout to have mobile coupons scanned directly from the device.

A re-release of the Walgreens app for iOS, BlackBerry and Android included a new coupons section that will issue up to three new deals each week exclusively for customers using the mobile apps. Rich Lesperance, head of digital marketing and merging media, Walgreens, says the program is the largest deployment of in-store mobile coupon scanning of which he is aware.

According to the app instructions,  the Walgreens staffer is supposed to scan the product and then scan the mobile phone as the customer holds it. Savings will range in value. The special coupon program started last week on Black Friday and will run at least through Christmas Eve. Walgreens has not commented on plans to extend the program after the holiday.

Walgreens has been experimenting with a number of models for using mobile technology to enhance the user experience and retain customers. The same app used for coupons also allows a prescription customer to scan their current medication bottle to refill an order by smartphone. According to the company, about a quarter of all online prescriptions now are refilled by mobile.

Mobile coupon redemption has always struggled with ensuring a seamless experience at the point of sale. Retraining salepeople to handle the process and equipping stores with hardware that can recognize 2D codes on LCD displays have been persistent barriers. Earlier this year, Starbucks deployed a program that scanned codes from the brand’s mobile apps in order to draw down Starbucks gift and debit cards.