This Column Has Been Updated With A Correction: New Social TV Player Umami Inks CBS Deal; Weaves in Online Video

Editor’s Note: This story incorrectly attributed the deal between social TV companion app Unami and syndicated TV shows “Entertainment Tonight” and “The Insider” to CBS, which distributes the shows. The deal was made directly with the shows. A correction has been published. 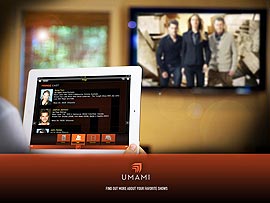 New social TV companion app Umami is expanding on its launch earlier this month via a deal with CBS syndicated shows “Entertainment Tonight” and “The Insider” that will mark the start of a push into online video as well for the social TV service.

Umami is one of a growing number of social TV startups vying to compete in what could become a crowded field. Already, Getglue and Miso have established beachheads in this space. But Umami has an interesting technology proposition since it relies on audio fingerprinting to sync its app to live or timeshifted programming from TV networks, or even to TV shows being watch online in some cases.

Under the CBS deal, Umami will sync companion content on iPads for the syndicated shows as well as additional video clips that might otherwise have gone unused, such as interviews, red carpet content, and behind-the-scenes clips, Umami said. The company hopes to add more video content from other content partners in the coming months to augment the existing content it links into such as cast bios, episodes summaries, photos, social sites and fan sites. Umami said it has struck deals with 40 content partners.

The voice recognition technology is why Umami has been likened to interactive TV. Because the app relies on voice recognition from a TV show, the user doesn’t have to do the work of checking in or calling up info. Even when a user changes channels or switches shows, the app listens for and finds the new show they are watching and serves up the related companion content, making the service more akin to earlier promises of interactive TV that never fully materialized.

Umami’s publishing platform also lets networks sell ads that are already running in their shows, for instance, in the app and potentially even tailored to a user’s demographic or geographic area. That gives the app a foothold as a venue for online video ads as well.

Social TV companies are worth paying attention to in the online video space not only when there is an online video tie-in, but also because some analysts have said they could become the de facto discovery services and recommendation engines for online, broadband and connected TV videos in the future. See my Nov. 29 Vid blog for more details.