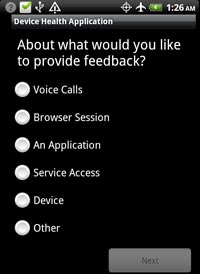 File this one under “It’s Going to Catch Up With Us Sometime Soon.” As the debate over digital data tracking moves from online behavioral targeting to cell phones, the stakes over the issue get higher for all sides. This is not going to go away.

And so another dust-up over the issue comes from independent researcher Trevor Eckhart, who says he has found a commonly used and often invisible app called Carrier IQ that supports Android, Blackberry, Nokia and some tablet devices. Basically, the app can record and confer back to an operator or hardware maker just about anything a user does on his device, from browsing activity to keypresses.

In fact, while the app declares that it is designed to help the supply chain understand dropped calls and interruptions in service, Eckhart finds the app is capable of incredibly granular tracking. It can even use things like call initiation and location change as triggers to send data to whoever is monitoring it.

Eckhart says leaked documents from Carrier IQ’s training files show how individual phones can be tasked remotely with triggers so that a monitoring company can actually track a specific individual’s on- and off-network phone use.

The maker of Carrier IQ has denied to David Kravets, writer of Wired’s ThreatLevel blog, that its software can log keystrokes, but Kravetz feels Eckhart has demonstrated the opposite is true.

Eckhart says he has found the software running on an HTC device, and Samsung runs it as well. Verizon acknowledges that it is gathering highly detailed information on user behavior on some of its  handsets and is the only carrier to openly deal with the issue, by showing users how to opt out of any data sharing. Sprint customers can see the app running, he reports, but there is no privacy policy or explanation attached to it.

On the one hand, anyone who has worked in the wireless industry knows that the granularity of user data available to carriers is staggering. But the degree to which hardware and software companies are able to monitor what is happening at every moment on the smartphones surely is not clear to most consumers.

This is not a matter of a zany kid scientist screaming about black helicopters or some Jeff Goldblum character ranting about global conspiracies. The Electronic Frontier Foundation sprang to Eckhart’s defense when the Carrier IQ folks came after him with a cease and desist order and demands that he turn over documents and contacts. Okay, well now we can start talking about black helicopters, but they are not the government’s.

Suffice to say we have not heard the last of this one…and we shouldn’t. If Eckhart’s claims are true, and Carrier IQ is refuting some of them, then this makes the Apple/Google privacy controversy over location tracking seem minor.