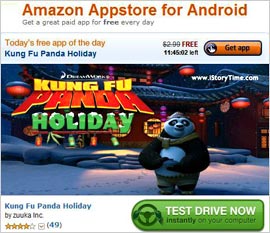 In the briefest and lowest-key of all possible notes to investors, British mobile payments company Bango says it has signed an “agreement to provide services to Amazon.” The self-consciously imprecise statement made on Friday at Bango’s site states only: "The terms of this agreement are not being disclosed. The Board believes it is too early in the relationship to accurately forecast the level of business which it may generate.”

Given Amazon’s new role in the Android market with its Kindle Fire and rumors that it is working on releasing its own branded smartphone, the largest online retailer’s partnership with a mobile payments company raises speculation about its long-term plans for mobile platforms.

One obvious function that Bango could provide for Amazon is carrier billing services for its existing Android App Store, one of many alternatives to the Android Marketplace that have emerged this year. Another possibility is that Amazon plans to release 3G or 4G versions of its new Kindle Fire tablet, and so app purchases might work more seamlessly with the carrier billing systems that would already be used to pay for the data plans. And if and when Amazon does enter the mobile phone market itself, this would give those handsets a billing and analytics system for the app store.

An analyst with Citigroup last month reported his belief that Amazon would launch a smartphone in the fourth quarter of 2012. To be sure, Amazon has been on an interesting trajectory that appears to lead in the direction of starting a mobile phone business of its own. The company is already the largest direct seller of goods over the mobile channel, according to InternetRetailer. Its entry into the tablet market was preceded by the launch of its own Android app store. And its Kindle Fire uses a heavily modified version of the Android OS that can access its own app store.

Amazon has been aggressive in its mobile efforts this year. Most notably, its PriceCheck app offered users discounts if they scanned 2D codes on items in rival physical retail stores but ended up buying them with Amazon. InternetRetailer estimates that Amazon will sell $2 billion in merchandise through mobile devices in 2011.