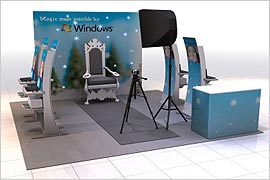 Not all 3D experiences are digital. But it is a little ironic, perhaps, that digital giant Microsoft is launching a campaign for its Windows platform via Clear Channel Airport (CCA) that puts the old-fashioned kind of 3D experience in lots of airports around the country this month.

Starting this week, Southwest Airlines and Windows will offer free holiday photos to travelers passing through a total of 21 airports nationwide to support a year-end campaign called “The Picture Perfect Holiday.”

Okay -- it's not entirely real-world, as the program includes an online element giving travelers who participate the tools to edit, share and store the photos via Windows 7 and Windows Live. Clear Channel Airport handles the at-venue static media assets for 19 of the airports.

The Microsoft display areas, measuring about 15 feet square, are intended to be mockups of Santa's workshop. They include a real Santa (though, obviously, not the real Santa), with a holiday backdrop and interactive kiosks.

Visitors to the displays, which are in Southwest Airlines gates, can have their photo taken with Santa. After that a “Windows 7 Elf” shows participants how to edit, share, print or store the shots using the Windows products that Microsoft has running on the kiosks.

Separately, High Point, N.C.-based furniture maker Phillips Collection has extended its deal with Clear Channel Airport after its products, featured in a 3D display at Piedmont Triad Airport in Winston-Salem, N.C., ended up on Friday’s “Extreme Makeover: Home Edition.” The company's participation on the two-part ABC special, hosted by Ty Pennington, was the result of the show's designers catching the concourse display while in transit at Piedmont, per a spokesperson.

The design team then visited the Phillips Collection headquarters in High Point to find pieces to use in the two-part episode, which follows the “Extreme Makeover” team to Maryland to help the family of a teen who lost his hand in an accident.

The CCA spokesperson said Phillips’ new multi-year agreement is in another area of the same airport.