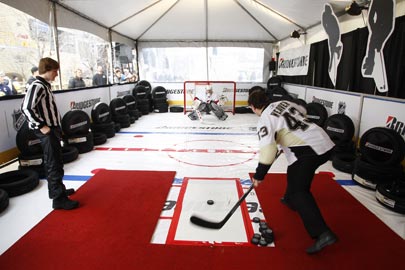 The ice may have a tough time staying below the freezing point for the upcoming NHL Winter Classic, since the rivalries, the sponsorship activity, the fans, and just about everything else about the game is going to be hot.

As Susan Cohig, SVP of integrated marketing at the National Hockey League, points out, the 2012 Bridgestone NHL Winter Classic is something like pro hockey's version of the Super Bowl. She jokes that the Jan. 2 game could also be dubbed "The Amtrak Series," as it pits neighboring rivals the Philadelphia Flyers against the New York Rangers. After all, the teams compete for some of the same fans (there are a lot of Philly natives in New York, and there is a big osmosis region along the corridor).

And the outdoor game, which will be in its fifth year, is being hyped via the HBO sports reality series “24/7,” which premiers Wednesday night. That platform -- an idea borrowed from the network's successful boxing documentary series intended to fan the flames leading up to major fights -- began in 2010, leading up to the 2011 Bridgestone NHL Winter Classic between the Pittsburgh Penguins and the Washington Capitols at Pittsburgh’s Heinz Field.

Last year's "HBO 24/7" series "was really compelling, and we saw it as another way to drive interest in the Winter Classic, not only to get fans behind the scenes but as a way to bring in new, casual sports fans," says Cohig, who tells Marketing Daily that the league is teasing the series with a 12-minute trailer for the show running on NHL.com.

The Winter Classic also has record sponsorship activation this year from brands like Bridgestone, obviously (since it is title sponsor for the fourth year in a row) but also from Honda, Verizon, GEICO, and MillerCoors, who are presenting sponsors and -- like Bridgestone -- have multi-year programs in place.

Those brands and others, like Reebok and McDonald’s, will activate Winter Classic Spectator Plaza -- a free, three-day experiential festival just outside the gates of Citizens Bank Park, where the game is being played.

"Activation is growing year over year from a partner perspective although there are fewer sponsors in terms of numbers," says Cohig, who adds that overall partner activation and revenue against the event is up 22% this year. "But on top of that, our major partners are committing independent dollars for broadcast marketing on NBC and CBC in Canada," she says.

"What you'll see in some instances -- and it depends on the brand -- are marketing programs leading up to the game, whether consumer sweepstakes or other activation elements. Or it may be that they will highlight the game through media." For example, last year when the Capitals played the Penguins, Verizon advertised via existing deals with both teams, not just on site. "So leading up to the game, in both markets, they activated through local relationships as an additional layer with the national level [NHL] activation," she says, adding that for this year’s game, since Verizon has a relationship with the Flyers and not the Rangers, any activation they do via that platform will be in Flyers-fan markets.

Cohig says brand partners are also using the Winter Classic as a launching pad for season-long, hockey-themed ads, with GEICO, Verizon, Honda, MillerCoors, and auto rental company Enterprise all introducing such creative during broadcasts of the Jan. 2 match. "We have seen, over the last couple of years, a big increase against in investment against hockey-themed ads," she says. "They are taking our brand and incorporating it to drive tier-one business because of the loyalty of hockey fans."

Across the season the NHL has a tent-pole strategy that supports season games with a string of marquee events like the upcoming Winter Classic, the Heritage Classic, and of course the Stanley Cup Playoffs. "So we have created this strategy the offers big platforms for activation by marketing partners year-round."