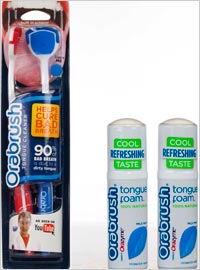 Orabrush, the two-year-old intra-oral hygiene products company known as much for its inverted marketing success as for its eponymous product, is launching its second product: Orabrush Tongue Foam, which the Salt Lake City-based company is touting as an enzyme-infused tongue cleaner that ameliorates halitosis. The $4.99 per unit product comes in a hand-soap style dispenser with a finger pump.

Orabrush is the third most-subscribed sponsor channel on YouTube, behind only Old Spice and Apple --which is fine with the company's CEO, Jeff Davis, who came to the startup after over two decades at Procter & Gamble, ultimately leading global operations for the Wella business as VP/general manager, P&G Salon Professional.

The new product, like the Orabrush, is available both online (Amazon.com and Orabrush.com) and at something like 16,000 brick-and-mortar retail outlets in the U.S., including 900 Walmarts. The company has also expanded distribution into new discount stores and supercenters with an introductory "buy one, get the other" promotion.

"Social media can disrupt how consumers get information and are converted to do something with it," says Davis, who tells Marketing Daily that the company's social/digital essence allows it to do fast introductions. "We went from concept on foam to ready-to-sell in less than six months using our online marketing model," he says. "We were able to do testing with nine online focus groups using Google+, which shows the ability of a small company to be operating the way I did at P&G, but with a third of the cost and a quarter of the time to get something out to market. We focus on a predictive online model, which lets us do what took much greater cost and complexity at P&G. And I am getting high, great grade quality ROI on success or failure based on online. That model is incredibly productive."

He says that 11% of the traffic to Orabrush's YouTube channel is following through by going to Orabrush.com, and 10% of that number is then buying online. "We are going to where consumers are and picking them up with creative content."

The company used the same model, he says, as part of the testing process for the new oral foam -- testing positioning, messaging, pricing, and packaging through an 11-week long process of offering an array of market positions, packaging and pricing to a virtual focus group, with the winner garnering 35%.

"In the traditional model, you have a concept, you go out and do focus groups, then put it into retail and test it, which it makes it more difficult to make changes. Predictive online modeling lets us deliver one kind of messaging, pricing, packaging and visuals to one group and another to a different group." Davis says that over 11 weeks the company ran 15 different multivariant tests in real-time. The winning version, he says, delivered a 35% conversion. "That's double what some of the other tests were doing."

The company is ramping up the retail presence for its two products as well, after a year of marketing the Orabrush product, which is now in 114 different countries. According to Davis, the new product is launching to an additional roster of retailers including CVS and Kroger. He says that while 80% of Orabrush revenue is driven by offline retail sales and 20% is still through online channels, the online slice of the pie hasn't gotten any smaller. "I thought that as we got well distributed to retail with a $5 value proposition online sales would wane, but it hasn't been the case. There is still 20% conversion, and it is staying constant."

While traditional advertising is an unlikely direction for Orabrush -- as the company has done quite well, thank you, with a pure digital "disruptive" marketing play -- it will probably do more experiential, guerrilla, sponsorship and collaborative efforts, per Davis. Orabrush has already had its person-wearing-a-dirty-tongue character at events like the VidCon 2011 conference in Los Angeles this summer.

"We think we can do a lot more of that, as we have a platform and the brand recognition," says Davis. "And we think there is a real opportunity for cross-category promotions, and collaborations at retail."