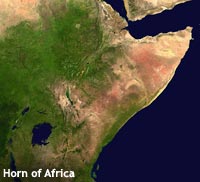 With the drought and famine in the Horn of Africa getting worse by the day, the Ad Council and U.S. Agency for International Development are stepping up their “FWD” campaign. It seeks to raise awareness of the disaster by encouraging individuals to “forward” facts about it to others -- with the help of celebrity athletes from the NFL.

Like previous spots in the campaign, the PSAs will be distributed by the Ad Council to media outlets worldwide, where they will run in donated airtime.

Launched in September, FWD (which is also an acronym for the causes of the disaster -- famine, war, and disease) encourages viewers to support humanitarian organizations engaged in relief operations, including the American Refugee Committee, CARE, Catholic Relief Services, Mercy Corps, Save the Children, UNICEF USA, World Vision, and World Food Program USA.

Individuals can text GIVE to 777444 to donate $10 to the consortium of humanitarian organizations listed above. The campaign also aims to raise awareness and build support for the Obama administration's “Feed the Future Initiative,” which is intended to prevent similar disasters before they start.

The campaign directs audiences to www.usaid.gov/FWD to find more information, including a listing of U.S.-funded humanitarian organizations working in the Horn of Africa.

According to the organizers, since its launch the FWD campaign has resulted in 117 million social media shares, reaching 18 million people on Twitter and 50 million on Facebook.

With tens of thousands already dead, 4 million people are currently experiencing food shortages and 13 million people are in need of emergency assistance in the Horn of Africa, making this the region’s worst famine in six decades.