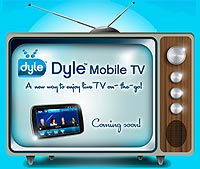 The long wait for local digital TV broadcasts coming straight to smartphones may be near an end. Almost. MetroPCS is partnering with the MCV (Mobile Content Venture) consortium of broadcasters to bring their Dyle Mobile TV product to a special Samsung phone later this year. The technology lets a smartphone receive digital TV signals from local broadcasters onto the handset via an embedded receiver.

The technology, and the MCV group, have been one the verge of a rollout for many years. MetroPCS will be the first carrier to agree to deploy the technology, on one handset at least. The Samsung smartphone will run the Android operating system and include the necessary ATSC-Mobile technology to receive live TV signals.

Dyle Mobile TV is powered by 15 allied companies, including Cox, Belo, E.W. Scripps, Gannett, Fox, ION Television, NBC, Telemundo, Univision, and Media General. The system relies on digital broadcast signals that the group says will be available in 32 markets that cover 50% of the U.S. population. The programming will include national and local shows throughout the programming day. It will be available in major markets served by MetroPCS, including New York, Los Angeles, San Francisco, Boston, Miami, Philadelphia and others.

The Dyle Mobile TV service will be free to consumers at least to the end of 2012,  the company tells us. Pricing for the handsets has not been determined.

Mobile digital TV has a long and drawn-out history. That it relies on a TV signal that is independent of traditional cellular voice and data channels has made it a tough sell to the mobile carriers that must agree to include it in the handsets they sell. It has always been an open question how carriers benefit from piggy-backing the signal onto their phones, how ad revenue might be shared, and whether the model clashes with other mobile video initiative from the operators.

MCV/Dyle says it has not determined yet whether the ads broadcast to the handset will carry standard TV pods or if mobile-specific pods will be included. They would not specify any revenue-sharing deal between Dyle and MetroPCS.

Whether users want or need live TV service to their handsets has always been unclear. On-demand streaming of specific content keeps the mobile user in full control of timing and context for their viewing. On-the-go grabs of live TV can just as easily drop users into a lengthy ad pod as it could give them the specific content they like. As people use their devices in-house more often as alternative TV screens, however, a role for portable TV may emerge. But since the age of the Sony Watchman in the 1980s, mobile TV is a model that has always struggled to get traction.