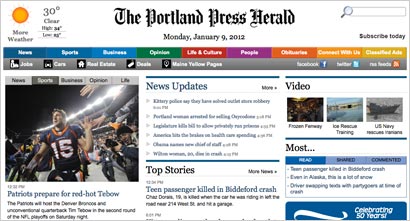 2100 Trust, the group of investors originally formed to make a bid for The Boston Globe, has turned its attentions farther north with the acquisition of MaineToday Media Inc., which publishes the Portland Press Herald, Maine Sunday Telegram,  Kennebec Journal and Waterville’s Morning Sentinel, according to Aaron Kushner, the Massachusetts businessman who founded the group.

The deal comes several years after another group of investors, led by Richard Connor of Bangor, Maine, bought the Portland Press Herald and other newspapers from the Seattle Times Co.

Originally Kushner, who previously served as CEO of a greeting card company, formed the 2100 Trust to make a $200 million bid for The New York Times Co.’s New England Media Group, which includes The Boston Globe, Boston.com Web site, the Worcester Telegram & Gazette and its associated Web site. The bid was rejected, however, and NYTCO now says The Boston Globe is not up for sale.

The sale of MaineToday Media is just the latest in a flurry of deals in the newspaper industry.

Last week, The New York Times Co. sold its Regional Media Group, including 16 newspapers and related businesses, to Halifax Media Holdings LLC for $143 million in cash. A week earlier, The Chicago Sun-Times and a number of other daily and weekly newspapers serving the Chicago area were acquired by Wrapports LLC in a deal worth $20 million.

At the end of November, the Omaha World-Herald Company, publisher of The World-Herald, was purchased by Berkshire Hathaway Inc., the investment company founded by billionaire investor and Omaha native Warren Buffett, for $150 million in cash and the assumption of $50 million in debt. In mid-November, The San Diego Union-Tribune was sold by Platinum Equity to MLIM, LLC, a company owned by San Diego real estate developer Doug Manchester, for an undisclosed sum.