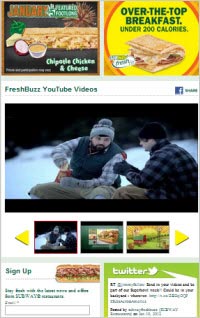 For the second year in a row, Subway has the highest Buzz score across all 1,100-plus consumer brands tracked by YouGov’s BrandIndex.  (Buzz rankings for the QSR and beverages/snacks categories are also included, below.)

Subway was the only dining brand to make the overall top 10:

BrandIndex's buzz scores range from 100 to -100, and are compiled by subtracting negative feedback from positive. A zero score means equal positive and negative feedback. 5,000 consumers drawn from an online panel of 1.5 million are surveyed daily (margin of error: +/- 2%).

YouGov notes that Subway’s buzz benefited from its expansion of its breakfast program (including breakfast offerings within its Fresh Fit menu) and from featuring a different $5 Footlong sub each month.

But the brand also drove significant buzz through a wide variety of promotions and marketing efforts throughout 2011. For example, its August launch of an Oven Crisp Chicken sub was supported by aggressive TV ads -- some taking jabs at the heavy grease in competitive QSRs’ offerings; some featuring football stars and Super Bowl champion-turned-football broadcasting celeb Michael Strahan (who hosts the "Subway Post Game Show" following Fox Sports football coverage). The Famous Fans also promoted the sandwich via messaging/tweets on their social media accounts, complementing Subway's own social media efforts and its online, print and ESPN Radio “Hotline” program advertising.

More recently, Subway’s “Customer Appreciation Month” -- in which customers could get a regular, 6” Meatball Marinara or Cold Cut Combo sub for $2 throughout December 2011 -- was a hot topic on social media, confirms Tony Pace, global CMO of Subway FAF. The promotion also included a partnership with Coca-Cola in which customers could download from Subway.com a free holiday song by Austin Adams, who is releasing his first album this year (and once worked at a Subway restaurant).  As is the chain’s norm, the month also included other promotions, including a free 6” sub with any $25 Subway Card purchase or card reload, and the ongoing $5 Footlong of the Month offer.

Offering a promotion like the Customer Appreciation Month  in December “flies against the common wisdom that drives so much of QSRs’ marketing calendars," Pace recently noted to Marketing Daily. “Most QSRs launch special deals in January, as part of promotion marketing calendars that are monotonously predictable. We think the calendar should reflect what makes sense for our business. And thanking our customers by offering a really special deal around Christmas made sense” – driving strong sales and enhancing loyalty, Pace says.

Subway’s Facebook page, which features shareable FreshBuzz YouTube videos as well as various promotions, currently has more than 9 million “likes.” Its Twitter presence (currently promoting a “Subway Subs Across America” video contest in partnership with “Late Night With Jimmy Fallon,” including tweets from Fallon himself) has more than 280,000 followers.

As for the other overall BrandIndex buzz leaders for 2011, YouGov offers some context for their scores:

Of course, given its overall leadership, Subway also led the list of QSR-category Buzz rankings for 2011.

The top five QSRs and their Buzz scores:

The QSRs that most improved their Buzz scores during 2011:

Here’s are the top five Buzz leaders list for this category, and their scores:

Here are the beverages/snacks brands that most improved their Buzz scores in 2011: