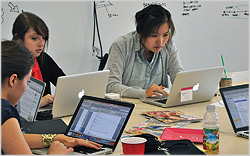 With tweets from London and Rio, HUGE shapes next-generation social

When Brooklyn-based HUGE hired a managing director in November 2010 to start a London office, it took a giant leap of faith. It had zero business across the pond, and only one person to drum up any. By the time the office opened its doors in January 2011 it had doubled in size — to two employees, and zero business. (The office doors actually belong to IPG sibling Lowe and Partners, where HUGE is camped out until its own space is ready in January).

Weeks later the fledgling office got its first assignment from Unilever and began an ascent that would take it to 11 accounts and 35 employees within 10 months. For huge chief executive Aaron Shapiro, landing that business “was the moment of the year.” But it was just the first of many to come — both abroad and at home — that made 2011 a banner year for huge.

First, it solidified its position as the industry’s top social strategist, taking its groundbreaking 2010 social marketing program, Pepsi Refresh, to a new level in 2011, adding more social sharing options and putting greater emphasis on content and users’ stories. The result? A 17 percent increase in time spent on the site, and a 30 percent hike in the number of monthly submissions of “Great Ideas” competing for $20 million in Pepsi grant money. The agency also expanded its work on other PepsiCo brands — completing digital strategy, design and development for Pepsi, Pepsi Max and Propel.

The main event for Target Stores was a Back-to-Campus Web campaign aimed at engaging college kids with shopping checklists, social media sharing and daily promotions. For Budweiser, it was a strategy to optimize the brand’s global Facebook presence for regional markets in their own languages. And for Svedka, it was a digital, social and public relations campaign supporting the brand’s summer Walk of Shame promotion. That campaign doubled overall Web and Facebook impressions, and increased the number of active users by 10,000 a month.

The London client roster now includes five Unilever brands across Europe and the Landmark Group, one of the largest retailers in India and the Middle East, according to managing director Ray Samuels. huge was also selected to be on the British Broadcasting Company’s digital design agency roster. “We’ve done e-commerce for retail, consumer engagement platforms for packaged goods, rapid prototyping for the BBC, and new-product strategy for a global media company,” says Samuels. Still, it wasn’t until November, when the agency was invited to present at Internet Week Europe, that it hit him: “Oh, my God … We’ve arrived! Samuels says they’ve even had to turn people away. There were lots of questions about what makes HUGE, HUGE, and people wanting to work for us.” Perhaps that’s because Michal Pasternak, Partner, User Experience, spoke about another 2011 initiative that she says has “galvanized” the company: the birth of huge UX School.

Given the explosion of the digital industry and fierce competition for talent, the agency decided to grow its own supply by building a three-month training program in interactive design. After interviewing students at 34 colleges, it chose 10 candidates from five countries to make up its first class. They represented a wide mix of experience — digital, graphic, architectural — much like the staff at huge, which provided the instruction.

“We assigned the ‘teachers’ from all over the company, not just from ux,” says Pasternak. “It made such an impact on us as a company. It forced us to think deeply and carefully about what we look for in employees.”

HUGE hired nine out of the 10 trainees, holding spots for those who aren’t graduating until June. The agency is planning a second session for this winter, adding courses in design and project management, and another next summer, as well as a technology course. That makes 40 new employees who can hit the ground running — a good thing, given how fast HUGE is growing.

The launch of the London office and expansion in Rio and Los Angeles also helped make 2011 a record year for HUGE, with revenue doubling to an estimated $86 million, and the number of staff topping 400. But not all the growth came from the emerging offices; billings soared in Brooklyn, too. The agency added American Express, Pizza Hut and Comcast to its roster, and significantly grew its hbo, Pepsi and Target accounts. Its award-winning design of hbo go propelled the premium channel’s mobile streaming application to the top position on iTunes the day it was released, and garnered 3 million downloads in less than two months. Other 2011 launches include the new ruelala.com, barneys.com, and the new bio.com.

Looking back on 2011’s highlights — the launch of the London office, growth in Brazil and la, new business in New York, and the promise of new talent thanks to the  School — Shapiro muses that huge may be the fastest-growing agency on earth. He’s not bragging, though — “just savoring the moment.”