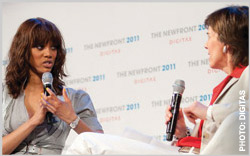 When a champ is defending his title, he needs to keep pace with the challengers and adapt to various fighting styles, always staying a step ahead. Digitas, a global agency whose regional offices have more people than most agencies have in their entirety, is surprisingly fleet of foot for a heavyweight, and has stayed in front in 2011 by correctly anticipating the next move.

To this end, the agency’s new Mobile Labs, which have been in the works for about a year and a half and are now coming to fruition, have positioned Digitas for the next generation of mobile products. The strategy has paid rich dividends already. Insights gained through partnerships, such as one with Google Mobile, have led to this work’s first physical manifestations: a Mobile Lab in Boston, a New York Lab set to open in December and a third Chicago Lab slated for 2012. “We really established some time ago that understanding the next generation of mobile experience was going to be critical for our clients,” says CEO Laura Lang, in an interview shortly before the announcement that she would join Tim Inc. as CEO.

In the past year, the knowledge gained from developing mobile capabilities has already been a major factor. The partnership with Google Mobile gave Digitas proprietary insight into how to help clients make the right investments in the mobile experience and found specific in ways that clients could change their mobile strategy through dedicating spending and building platforms that are more effective.

Digitas, a finely tuned machine, is an agency built for performance. But “performance is how you define it,” Lang says. For clients who are direct marketers, the definition is simple: Did you acquire the customer? But others have more complicated goals. “For some clients, it’s much more about changing the way consumers feel about a brand, engaging in dialogue or raising a hand for more information,” says Lang, adding, “everything we do has to perform.”

Those differences can be seen in the splendid, but very different way Digitas’ campaigns perform. Take for instance the effort on behalf of client Aflac to find a new voice for the duck. (The insurance company had fired Gilbert Gottfried, the previous voice of the duck, over insensitive comments the comedian made in the wake of the tsunami in Japan.) Aflac came to Digitas in crisis mode, and within 24 hours a campaign was going full-strength. With search leveraged to create an opportunistic moment, the campaign garnered nearly one billion media impressions, including both paid and earned media; a partnership with job search site Monster, which drove people to Aflac; and to the positive spin of the quest for a replacement quacker.

Compare that to the deep partnership Digitas spearheaded between client Delta and TED, the nonprofit devoted to “ideas worth spreading.” The partnership morphed into “Ideas in Flight,” harnessing the power (and goodwill surplus) of ted to change negative perceptions of airlines. Kenneth Parks, Digitas’ executive director in Atlanta and Stamford, says this was the deepest partnership ted had participated in, and that their network of fellows and speakers, whom he refers to as “the tedsters” began brainstorming at ted Long Beach. The tedsters, says Parks, “took it on as a noble challenge: to try and fix the airline industry.” What they came up with was a Delta and ted sponsored co-creation platform where consumers could make real suggestions for change, which both ted and Delta would then shape into real improvements. The effort became one of the standout social branding campaigns of the year.

If it’s clicks you like, look no further than the campaign Digitas ran for client gm on YouTube this year. The effort garnered the highest one-day click volume in YouTube history and broke the paid search record the next day.

One way that Digitas has kept bobbing and moving is by staying out front of the In Front with the NewFront.  When Digitas held its first NewFront four years, Lang says, “a lot of people thought, ‘Well, this is pretty odd’ and they showed up out of curiosity and for a free drink.” But over the past couple of years the NewFront has become a premiere event for digital content, and one that includes many parts of the industry ecosystem. (If you are reading this, it’s a good bet you’ve been, and gotten more than a free drink.)

This past year the NewFront took center stage as one of the must-attend events of Internet Week, and positioned Digitas as an industry leader. “It’s actually become a part of the fabric of how we do business,” Lang says.

It’s another example of the way Digitas has showed vision and acted upon it. The partnerships, research initiatives and white papers become actionable strategy and plans. “We’re actually changing the way our clients are building their brands as well as their businesses,” Lang says. “We don’t just write about it; we do it.”