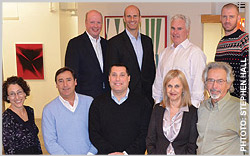 With new partnerships and fast-growing billings, this indie shop still refuses to take itself too seriously

Not many media agency chief executives would have the self-confidence to star in a funny online video celebrating the win of an “intriguing person” award and, perfectly deadpan, introduce his “partner,” Little Bill, an action figure version of himself in matching grey suit and red tie. And few would honor a photographer’s request to stand on a conference room table, immaculate in formal business suit, for a shoot celebrating an Agency of the Year award.

Hard to imagine any other media head doing either of those things. Irwin Gotlieb? Seriously. Laura Desmond? Surely not. But Horizon Media Founder, president and CEO Bill Koenigsberg did. Still, the whimsy is buttressed by substantive industry thought leadership. Koenigsberg also serves as Chairman of the 4A’s influential Media Policy Committee and Horizon is usually among the first adopters of new communications theories and practices.

The head of the largest independent media services agency in the world never worries about what his shareholders will say.

He doesn’t have any.

Koenigsberg can take the road less traveled or, more to the point, do what’s best for his clients rather than his bottom line. And the agency, just like its leader, is confident enough to innovate boldly — it was named one of the 10 most innovative advertising companies in the world by Fast Company — and assuredly go toe-to-toe with global behemoths and win, which it does regularly.

In fact, at $3.4 billion in annualized billings, the shop is itself a behemoth, ranking seventh out of the top 14 holding company media agencies. Horizon’s potent mix of fierce independence, laser-focused client service and willingness to push the envelope is unchanged from when Koenigsberg founded the shop in 1989, and their rise from major minor to major player top-tier competitor has been steady ever since. “Our engagement planning powered by rich consumer insights and channel planning tools are setting us apart,” says Koenigsberg. “The integrated digitalization and socialization of the agency provides a connection approach that is fully actionable in all channels, which leads to significant innovation and media amplification.”

Last year Horizon won nearly $1 billion in new business, up 25% over the previous year, the staff grew 18% to 675, and it was the third consecutive year in which annualized billings grew by more than 20%. The shop made major industry news when it won the $400 million Capital One business followed by a victory in United Airlines’ $100 million global media review. They also added Kraft Mac & Cheese, Clearwire, Constellsation Brands, Mohegan Sun, Tillamook Cheese, Blockbuster and 1-800-Dentist to its roster.

Even when it falls short in new-business competition, Horizon’s flexibility and inventiveness stands out. In the giant Comcast/ NBCU consolidated media review last year, the shop, which handled NBC for many years, partnered with another incumbent, Omnicom Media group, giving a whole new twist to the concept of “frenemy.” The partnership didn’t win, but its unique approach gained considerable attention.

Horizon’s specialty divisions have also kept pace— mostly outpaced, actually — its far larger rivals. The shop’s sports and event marketing unit, Scout, has notched a breathtaking 580% growth since it launched in november 2010 and has been involved in the acquisition of more than $400 million in sports media and marketing assets. Many of Horizon’s largest clients play with Scout, including GEICO, Capital One and Corona.

The agency’s digital group doubled its year-over-year revenue in 2011 and doubled its overall staff. Horizon also launched several key initiatives in the digital space last year, including a partnership with Adap.tv to provide proprietary category insights for its entertainment, retail, CPG and financial services clients; a digital creative management group; and the roll-out of a “Digital CAT Scan” program to gauge the level of digital literacy and expertise across the enterprise.

Also in 2011, Horizon entered into several intriguing strategic partnerships, such as its deal with RealVu, the pioneering “viewable impressions” provider that gives Horizon first-mover position in the key area of accountability and transparency of digital media buys. And it was the first agency to partner with Trust Metrics, which provides ranking data on the ad effectiveness of various websites before any media is bought. The shop’s social media group, its consumer insights unit the WHY group, and its channel planning offering the WHERE group also recorded significant growth year-over-year.

And then there’s that aforementioned flair: Interior Design magazine developed a full feature on Horizon’s new New York office with photos in its September issue. (The Western office also moved to bigger offices in 2011.) The Manhattan headquarters’ includes 7,500 square feet for an in-house wellness center that when completed will include a yoga center and a gym. The space is also used for many industry-related events, such as a series of “Knowledge Café” events whose first two presenters were Hulu CEO Jason Kilar and Pandora CEO Tim Westergren.

No word yet on whether or not Little Bill will get his own office.