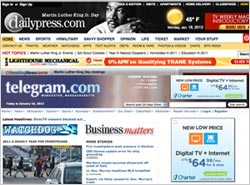 There is more consolidation and cost-cutting afoot in the newspaper industry. A spate of newspaper acquisitions have been followed by a flurry of layoffs, due in large part to publishers cutting printing and distribution operations.

The Worcester Telegram & Gazette is transferring printing duties to The Boston Globe, a sister publication also owned by The New York Times Co., allowing the T&G to eliminate 60 jobs at its printing plant in Millbury, MA.

The newspaper’s daily and Sunday editions will be printed at the Globe production facilities; however, T&G will continue its commercial printing operations at Millbury, including pre-print advertising inserts.

In addition, The Daily Press of Newport News, VA announced last week that it is laying off 30 workers, with Publisher Digby Solomon explaining they held “positions that we no longer require.”

The newspaper didn’t say what kind of jobs were affected. An official statement noted that it is also hiring 15 positions in its newsroom and advertising operations.

Other recent hits -- 105 jobs were cut by The New Haven Register, mostly involved in the printing and distribution of the newspaper's advertising inserts -- functions that will be outsourced to The Hartford Courant. The Hartford Courant will also take over responsibility for printing the Register's sister publications, The Register Citizen and Middletown Press, also owned by the Journal Register Co.

The New Haven Register is also selling its office and production facility, located on a 13-acre parcel in New Haven.

Separately, up to 200 employees may be laid off as part of Halifax Media’s acquisition of The New York Times Regional Media Group, according to an SEC filing, which specified some of the terms of the deal. In negotiating the sale of the Regional Media Group, The New York Times Co. stipulated that Halifax be allowed to lay off no more than 10% of the group’s workforce. It’s not clear whether Halifax will lay off the full complement allowed under the deal.