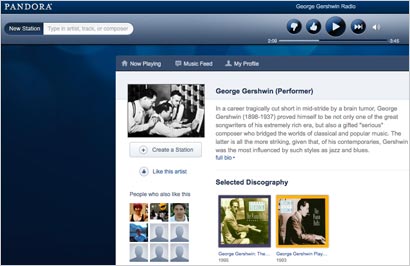 Online radio service Pandora saw its average listenership increase in a number of major metropolitan markets during 2011, according to the company, with gains ranging from 50% to 100% among key demos including adults ages 18-34.

During the 2011 holiday season, Pandora’s audience listening had increased to an average quarter hour rating of 1.0 or more in the 18-34 age demo in major metropolitan markets, meaning that 1% of adults in that age group were listening to Pandora for at least five minutes during a quarter-hour measurement period between 6 a.m. and midnight.

The biggest gains, of 100% or more, were seen in the New York, Atlanta, Dallas-Fort Worth and Boston metro areas. Los Angeles, San Francisco and Washington, D.C. all saw AQH increase 71% from 0.7 to 1.2.

Pandora reports its total number of listeners per week, or cume, increase in a range from 44% to 75% in the major metro markets over the course of 2011. The online radio service’s weekly cume in the 18-34 age set has reached 22% or more in each of the top local radio metro survey areas.