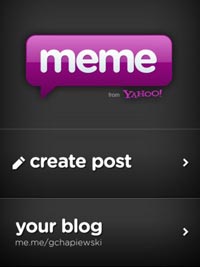 Amidst its managerial mayhem in recent years, Yahoo's aggressive mobile efforts are often missed. The m.yahoo.com portal remains heavily trafficked, and Y's email makes it one of the perennially popular mobile destinations. The company also experimented early and widely with a series of apps that focused on core portal functions like Yahoo News, Shopping, Finance and Answers.

In a post at the Yahoo Search Blog on Friday, the company announced it was yanking ten of its early- in apps from both Android and iOS stores and discontinuing support for them. The defunct apps list includes the news, movies, answers apps on Android and shopping, sketching, and deals apps on iOS. The app search tool on both operating systems has also been pulled, but its functionality is not embedded in Yahoo’s mobile search site and apps. Lesser-known apps like Meme and Min, as well as Finance on BlackBerry, are gone too.

This move leaves a number of apps still in place, of course. The finance, portal, fantasy sports, Flickr, Answers and search apps among many others remain in the iOS store, for instance. In the Sports category, Yahoo Sportacular Pro is among the top 20-most-popular paid iPhone apps. Yahoo Messenger is among the top 25 social networking apps -- ahead of Google+, in fact. Yahoo says that its mail, messenger, Sportacular and Flickr apps have millions of users.

Claiming that the mobile “decommissioning” efforts are “making room” for more innovations, the team says it is headed into 2012 with a “mobile first mindset.” It promises more apps and functionality, naming its TV companion app IntoNow in particular.

Personalization appears to be a key theme for Yahoo. as it is for many media companies now contemplating the next stage of mobile development. The company points to the recent release of its Livestand customizable iPad app of Flipboard-like feeds from select content providers.

Personalization was a central theme at last week’s Mediapost Mobile Insider Summit. Many media companies have achieved considerable scale in their mobile efforts and gained a stronger sense of how their users want to access mobile resources. ESPN’s head of Mobile Michael Bayle in his keynote cited the enormous popularity of the personalized experience in the company's flagship SportsCenter app.

In fact, Like Yahoo. Bayle suggested that after a first wave in which the brand issued an enormous portfolio of apps, it was looking toward focusing efforts on fewer core properties that could contain more and more personalized functionality.