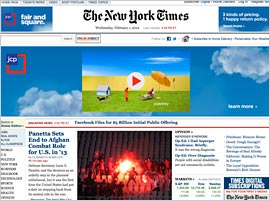 Newspaper Web sites attracted an average of 111 million unique visitors per month in the fourth quarter of 2011, up 5.7% from 105 million in the same period of 2010, according to comScore figures cited by the Newspaper Association of America.

The 2011 figure includes 112.2 million visitors in October, 110.3 million in November, and 111.6 million in December; the quarterly average equals 63% of the total U.S. adult Internet population of 176.2 million, according to the NAA and comScore.

In addition to the increase in the average number of monthly unique visitors, the average number of daily visitors increased almost 15% to 24.7 million in the fourth quarter of 2011. Plus, the total number of minutes spent on newspaper Web sites increased 14% to 11.59 billion in the fourth quarter of 2011. This increase was especially noteworthy, considering the relative absence in 2011 of political news related to the 2010 midterm elections.

Despite the good news about continuing growth in newspapers’ online audience, the newspaper industry as a whole is still struggling to effectively monetize their online readership.