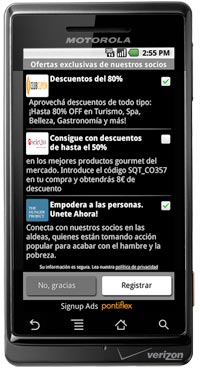 Lead-generation firm Pontiflex has added Spanish-language capability for its mobile sign-up ad platform, which allows consumers to choose the types of ads and offers they get. The move comes as part of its recent step to extend its sign-up ads internationally so U.S. developers can run country-specific ads in local languages to broaden their audiences.

He estimates about 20% of its audience are Spanish-speakers -- the second-most common language after English. “The Hispanic market within the U.S. is a big piece too, so we’re trying to extend our outreach to Spanish-language advertisers,” said Lasker.

Numerous studies have shown that U.S. Hispanics are over-indexed in mobile usage. A 2010 Pew study, for instance, found more than 87% of English-speaking U.S. Latinos owned a phone compared to 80% of non-Hispanic whites. Another Pew study found that compared to the general population, Hispanics use their cell phones more often, and they use more features on their phones.

To tap that mobile-centric audience, Pontiflex has already run test campaigns on behalf of advertisers including the nonprofit Hunger Project, the Mexico Tourism Board and Club Coupon. As long as a smartphone is set to Spanish-language, users will see the Spanish-language version of the ads, according to Lasker. “We’ve seen much higher take rates and much higher engagement with the ads,” he said, compared to the average for English-language ads served to international markets.

The Hunger Project effort garnered 5,000 sign-ups, while the “Visit Mexico” campaign attracted 25,000, through the ads ran on iOS and Android apps across all categories. Lasker said some of Pontiflex’s large CPG clients are rolling out campaigns in Spanish parallel to their English-language ones.

The agency is also trying to connect with Hispanic-focused agencies in New York to bring on more clients for its Spanish-language offering. Regardless of language, Pontiflex enables developers to insert ads in their mobile apps that ask consumers to sign up to learn more from relevant advertisers. And marketers pay for ads on a cost-per-lead (CPL) basis.