To Win Some Hearts, Agency Makes A Play For The Sole (Two At A Time)

Most agencies try to create campaigns that move people to act not just with their minds, but also with their feet. A new one breaking today from the cementbloc hopes to do that literally -- by appealing to people’s hearts via their soles. The campaign for non-profit Coore Foundation evokes the human soul to encourage people to donate their homonymic equivalent -- you know, shoes -- to underprivileged children in Third World communities where bare feet can lead to dangerous health conditions.

“It can mean the difference between kids getting polio, hepatitis or another serious disease,” says Elizabeth Elfenbein, a partner at the health and wellness-focused shop, which is handling the account for Coore on a pro bono basis.

She says the campaign is one of several efforts that cementbloc will be working on for Coore, a non-profit that promotes health and literacy for children -- especially girls -- in underprivileged regions. In the case of the Grow Sole Project, the appeal is simple -- getting people to donate their “gently used,” or unused shoes at donation bins in churches, schools, office lobbies or other local community destinations.

Elfenbein describes the media strategy as “grassroots,” and says it focuses mainly on the soul-inspiring copy and eye-catching art in postcards, posters, and vinyl wraps around the donation boxes, as well as a viral video effort via YouTube. And of course, the kind of word of mouth that can spark when you inspire people’s souls.

The cementbloc, itself, is a good case in point. The agency’s team threw itself into the effort, with staffers donating ideas, copy, their time, and yes -- even their shoes. One of the ads entitled “Don’t Sell Your Sole. Donate It” features a used pair of sneakers donated by Elfenbein’s daughter. Elfenbein contributed a pair or her own cowboy boots. The cementbloc team also donated some attention-getting lines to pair with the, well, pairs, including “Do A Little Sole Searching,” “Save Your Eternal Sole -- Reincarnate,” “Chicken Soup For The Sole,” “Make Us Your Sole Beneficiary.”

Much of the work, including the video the agency produced about it, can be viewed in the lobby of its Flatiron District offices on Fifth Avenue in Manhattan beginning today -- in case you want to use your soles to walk over and check it out. If not, go to YouTube. 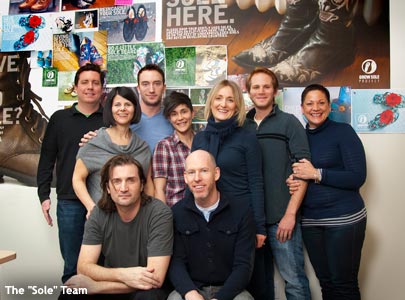 agency, campaigns, charity, non profit
1 comment about "To Win Some Hearts, Agency Makes A Play For The Sole (Two At A Time)".
Check to receive email when comments are posted.
Next story loading