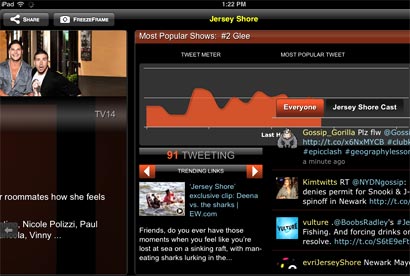 Ever find yourself at a big and noisy party, trying desperately to focus on conversation with one other person or your immediate circle? You appreciate the environment of being at a large gathering, but for this moment you really find the ambient noise distracting.

This is something like the phenomenon of “Social TV” within many second-screen experiences. Almost every companion app seems obliged to include relevant Twitter and other social media mentions of a show while you are watching it live. But trendy as anything with the moniker “social” may be in digital media right now, the actual value add of most “Social TV” executions seems to me highly questionable.

At yesterday’s idea-packed Tablet Revolution event in New York we took up one of my favorite topics – second screening -- and I was happy to hear this topic of social overkill addressed. Bravo TV’s Dominique Nguyen and Umami’s Scott Rosenberg both confirmed what I had long suspected – many users find those social streams more daunting than helpful. The torrent of posts is overwhelming. Many people see the thing flowing into the app and aren’t sure what to do with it, or where and how to enter it. Rosenberg says it is a real problem.

While the basic idea of plugging into the social channel for that group feel is well-intended, in reality many of the posts are just meaningless shout-outs and silly utterances that don’t enhance the viewing. Worse, it just gets distracting and feels like something that needs to be tended.

Thankfully, this is something both Umami and Bravo are thinking hard about in their next iterations of their respective apps. Bravo’s is coming -- and Umami launched its new version in the Apple App Store today in order to be ready for Sunday night’s Oscars telecast.

Rosenberg contends that one problem with the social TV experience is that it tries to complement the visual experience of TV with a text experience. And so this Umami version adds two key visual elements to Social TV: screen grab sharing and a dashboard. The “Freeze Frame” feature snaps an image of what is on and shares with your social network, so you can illustrate and comment on a scene or just share an ad, a recipe or fashion image, etc.

This function has the dual advantage of making social exchanges more visual, but also making them a bit more content rich. It gives a poster something to talk about. The other Umami addition is the “Dishboard” that uses infographic techniques to show levels of chatter about the show and highlights trending topics.

These are interesting first steps in working through the challenge of making social exchanges usable content in the second screen. Social media has always been too much of a good thing across the digital ecosystem. It drowned the Internet in bargain ad inventory. It swamped the data miners with a mass of user information and commentary that require complex algorithms to filter. The ad tech folks are still figuring out how best to scrape, parse and wrangle all of this data into usable targeting tools. And on the user end, these “feeds” of user-generated content have become fire hoses that are too unwieldy for consumers -- let alone TV viewers -- to manage.

The next generation of second-screen apps will not “tap” social media, but shape this resource into less of a motor mouth companion.