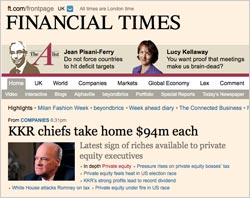 One of the first newspapers to implement an online pay wall is doing quite nicely by it: Pearson’s Financial Times Group derived 47% of its total revenues from digital sources in 2011, according to owner Pearson, up from 25% in 2007, the year that it launched.

Crunching the 2011 numbers, the FT Group now draws just over 27% of its total revenues from digital subscriptions, and about 20% from digital advertising.

The number of digital subscriptions to FT.com increased 29% to 267,000 by the end of 2011, accounting for approximately 44% of total paid circulation of 600,000. In fact, digital subscriptions are now the top source of new subs in some areas, including the U.S., where they surpassed new print subs this year.

The total number of registered users increased 33% to 4 million, with an average daily audience of 2.2 million across its print and online properties -- up 3% from 2010. Mobile users now make up 19% of the traffic to FT.com.