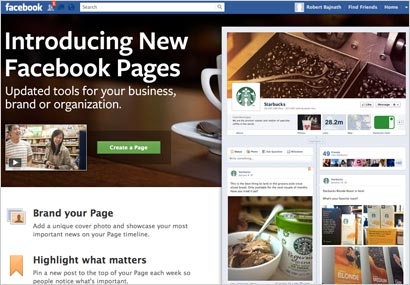 Facebook on Wednesday rolled out the new Timeline feature for companies with brand pages on the social network.

Like individual users, marketers on Facebook will now be able to use the visually oriented format to highlight their entire history, as well as show more current updates. The new brand pages are launching with a small group of partners, including Walmart, Dove, Tiffany and Harley-Davidson.

Facebook announced it would extend Timeline to brands when it first unveiled the feature for personal profiles in September. It has launched a help page explaining how Timeline works for businesses in advance of its fMC event in New York today, where it’s expected to formally debut the brand page upgrade.

New features include the ability to pin important posts to the top of the Timeline for a week and exchange private messages with users. Previously, companies were not allowed to contact fans directly.

Companies, like people, can also choose a large cover image for their pages. But the photo can’t include price, purchase information or calls to action -- so users don’t confuse them with actual ads.

All brand pages can upgrade to Timeline starting today. They also have an optional period to curate material before the changeover becomes mandatory on March 30.

Timeline for brands offers the potential for marketers to better showcase products and services and connect with fans, especially for classic brands like Coca-Cola or Harley-Davidson.

“It’s going to be a very interesting proposition for brands with a storied past that can really explore their history, as well as what’s happening more recently,” said Beth McCabe, vice president/director, social marketing and technology, at Digitas.

She and other agency executives suggested the overhaul could also have pitfalls for some businesses. Consider companies whose histories include controversies or PR debacles they would rather bury, such as BP. Like individual users, companies will be able to hide posts they don’t want to be surfaced.

But trying to whitewash difficult periods in a company’s past could also be problematic. “This new format is pretty unforgiving to those who would rather keep their history well and truly behind them,” noted Robin Grant, managing director of social marketing agency We Are Social.

The page update could also encourage more brands to create their own custom apps with the Open Graph platform around verbs such as “listening” or “cooking.” In January, Facebook released more than 60 new apps for Timeline, including ones for reviewing movies (RottenTomatoes), traveling (TripAdvisor) and Pinterest (“pinning” items).

The idea is that the new offerings will inspire users to visit company pages and interact with and share their content even more. “Overall, this is a positive move by Facebook, and a good opportunity for brands to show off their roots -- something that might actually be of interest to fans,” said Grant.