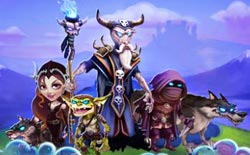 Declaring its independence from Facebook -- sort of -- Zynga is launching a new gaming hub that allows users to play on its Web site rather than through the social networking giant. Demonstrating that it can prosper separately from its longstanding symbiotic relationship with Facebook has been one of Zynga’s main goals as a newly public company.

To date, more than 90% of its revenue has come from its presence on Facebook, where popular games such as “FarmVille,” “CityVille” and “Mafia Wars” have become synonymous with the site. Now “CityVille” and five other top games, including “CastleVille,” and “Words With Friends,” will debut on Zynga.com this month, with more to follow.

The site will also feature games from third-party developers and emphasize social elements such as live chat, and its own social network dubbed zFriends. Players will each get their own profile highlighting their favorite games, recent activity and a score tracking users' “helpfulness” in sharing game-playing strategies.

Is it game over for Facebook? Not quite. Zynga.com users will still have to log in using their Facebook ID and all sales from virtual items within games will still be purchased using Facebook Credits, the social network’s payment system. Facebook takes a 30% cut of those sales.

If the new Zynga offering becomes a powerhouse in its own right, however, it could take valuable traffic from Facebook, since games are one of the most popular activities on Facebook.

In a research note Thursday, Macquarie Group analyst Ben Schachter noted: “If Zynga aggressively tries to push its users from Facebook directly to Zynga.com and monetize in anyway outside of Facebook credits, we could see complications in the relationship develop.” But he added that it’s too early to say whether the new site will prove a viable alternative to Facebook or other social platforms.

Zynga.com General Manager Manuel Bronstein told Reuters the new site is not intended to migrate users away from Facebook but provide another option for gamers to connect more directly with Zynga. The updated site will also include advertising, but the company is not providing details at launch.

The new gaming platform will debut on the desktop Web, but may expand to mobile devices, since the company is making a broader push to build its mobile business. Zynga introduced a dozen mobile games in 2011, including eight for mobile phones, and is expected to roll out at least another 10 mobile games this year.

In its first-quarter earnings call last month, Zynga said it saw strong uptake for mobile versions of games such as “Dream Zoo,” “Words with Friends” and “Zynga Poker” in the quarter. Overall, it reported a loss of $435 million, or $1.22 a share, on revenue of $311.2 million. Excluding certain costs, it would have earned $37.2 million, or 5 cents a share.

Zynga went public with a $1 billion initial stock offering in December. With 240 million users to date, the rollout of its own game platform should help the company toward its goal of reaching 1 billion users worldwide. The service will be offered in 16 languages including German, Japanese, Korean and Chinese.