Yelp IPO Pops - But How Does It Crack Local Ad Code? 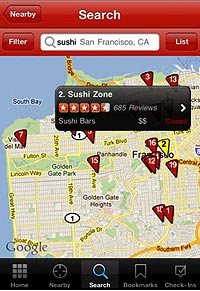 Local reviews and ad company Yelp saw the value of its shares climb 65% as its initial public offering hit the market on Friday, March 2. The company set the value of the stock at $15 the evening before, but by the end of the day on Friday it had reached $14.58 -- reflecting a market cap of about $1.47 billion, according to The Wall Street Journal. About 17.5 million shares traded hands during the day.

While other recent Web-based companies saw their value retreat from early IPO bumps (namely Zynga, Groupon and LinkedIn), some analysts say Yelp may have benefited from a lower profile and less market hype. Still the company came to market never having been profitable. It sells advertising at the local level -- a costly enterprise that has netted a $16.7 million loss (for 2011) off of net revenue of $83.3 million, WSJ reports.

The company said in its prospectus that it is used on a monthly basis by over 5 million unique mobile devices to find reviews of local venues. Users have contributed over 22 million reviews to its database.

The IPO naturally raises questions of what Yelp will do with its newfound cash. In other words, what are the likely targets for acquisition? Foursquare would be one likely suspect as that social network tries to pivot away from the simple check-in model to offer more substantial localized content. And despite its own IPO, Yelp itself may prove a buyout target in the future given its unclear path to profitability. Facebook, after all, is set to raise an Everest of cash in its looming IPO, and that company most definitely needs a local mobile ad strategy.

Local ad sales is a complex and costly proposition, however. The Yelp SEC prospectus shows exponential growth in its sales staff costs as the company expanded. Incumbent local publishers like newspapers, directories, TV and radio stations have always touted their superior positioning when it comes to digital advertising. And yet upstart start ups like Yelp, Groupon and Foursquare have come into the market trying to reinvent the local ad sales wheel.

Local ad market analyst Gordon Borrell tells Mobile Marketing Daily that while Yelp is a great user-friendly interactive tool, “I’m afraid it has many hurdles ahead of it -- not the least of which is how it will reach those millions of small businesses to extract ad dollars.” He says there are over 81,000 ad sales reps in the market for a range of media venues. “Yelp can’t just rise to stardom on the fact that it’s a terrific product,” he says. Startups with great plans to capture those local ad dollars always seem to run into the same challenge. Selling digital ad models of any kind to small businesses at the local level requires education, time, and differentiating a vendor from a dizzying array of new alternatives.

“It’s going to need a brilliant sales plan to convince small-business owners that there’s a return on investment for spending a dime with Yelp,” says Borrell. “The greatest hope I see is if Yelp teams up with an existing sales force, like the Yellow Pages or newspapers, to sell its product."