What The QR Is That?: Or Stupid Mobile Code Tricks 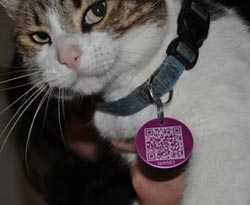 Call it “Silly QR Tricks” or “America’s Dumbest QR Criminals,” but the rampant and notoriously bad placements of QR codes now has a museum of its own.

“WTF QR Codes” is just starting to build its collection of risible and laughable notions for QR abuse. But we already have a code that reads “Scans for More Drugs” and pet ID tags with codes instead of lettering. Because our pet cats just love it when we push an iPhone in their faces. And there is the new mode of graveyard headstone with mobile 2D code activation. And the subway car ad for bedbug extermination. What is the likelihood of someone wanting everyone they are traveling with in close quarters to know they have a bedbug issue when they have to snap this code?

The rogue’s gallery of weird QR excess includes two men with codes shaved into their short-cropped hairdos. There is even a banana sticker (yeah, one of those tiny oval numbers) with a code on it. And then there are all of the instances where brilliant marketers planed scan codes in places or in situations where no one could easily (or safely) scan.

Like the waffle-suit-wearing parade character carrying a code as the procession walks by. No -- wait, Mr. Waffle, while I snap this.

And then there is the large code on the back of a freight truck -- only scannable from the moving car behind it. Illegal in several states, no doubt.

And there is the code found on a multi-screen ad kiosk, with the QR imprint broken up across several displays.

Or the QR code on the hood of a race car…because most phone cams have shutter speeds of 1/1000th of a second?

Or the many codes that are visible only from rapidly passing train cars or even the air.

Or the coded sign being towed by a prop place overhead.

It goes on and on.

I personally have never had to travel far and wide to find instances of QR inanity. Macy’s -- which some analysts have praised for their mobile savvy -- has a tendency to place its nicely branded code on displays, so that I literally have had to crawl atop the Martha Stewart cookware to get close enough to snap the shot. Oops -- there goes the ceramic paella warmer and the salmon poacher.

The WTF QR Codes Site is a Tumblr from two professional designers. Craig Villamor is the director of mobile experience for Salesforce.com and co-blogger Brad Frost is a Web designer and strategist at R/GA.

Frost tells us he started tracking codes and their uses when he noticed how so many of them failed to link to a mobile-optimized site. “I think most marketing-driven QR experiences are crappy, mostly because the content they drive to usually isn't that enticing,” he says. “I've seen some better uses, like one that said ‘watch the first episode for free’ and it actually did what it said. But I've seen a lot on the other side of the spectrum, including ones that drive to the same 30 second video people skip over on their DVRs.”

And yes, Mssrs. Villamor and Frost do have a code for their site, too. It delivers you to (wait for it) a wall of QR codes. "We don't get it either," reads the pop-up message.

mobile, qr codes
1 comment about "What The QR Is That?: Or Stupid Mobile Code Tricks ".
Check to receive email when comments are posted.
Next story loading