Google Play Tries To Catch Up With iTunes And iCloud 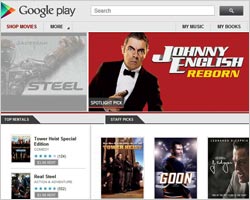 No one ever accused the Android Market of being particularly elegant. While the storefront for apps has evolved considerably from those clunky first days on the early G1 and Droid phones to a more stylish cross-platform destination, it never felt polished or nearly as full featured as Apple’s. But yesterday Google tried to remedy that by rebranding the Android Market as Google Play -- and pitching it pretty much the same way Apple touts iTunes and iCloud: buy and access all media across platforms.

The new location at play.google.com polishes up some of the integrated efforts that have been apparent at the Android Market for some time now. Android apps themselves are just a subset of a larger media catalog that includes movies, music and books. Unlike iTunes, the hub of activity is via a Web browser rather than a downloadable app. But like iTunes you can buy e-books, including new releases, music downloads and movie rentals.

Google Play is integrated with media that a Google member already has stored elsewhere in the system. For instance, all of the music I had uploaded to Google Music in the past was accessible from the Play interface. When a user rents a movie, the interface instructs you on how to access it on an Android device. And according to the company’s new promotional video for the service, the video material is synchronized across platforms as well. You can start and stop viewing a piece on one platform and pick up where you left off on another.

Google is also using the Play interface to work on its merchandising chops. It is marking the new storefront with a “7 Days to Play” discount promotion. Following Amazon’s lead in its App Store, Play offers deep discounts on some a “25-cent Play of the day” track and select albums and classic sets for $3.99 and $5.99. The 25-cent model extends to books and apps as well, where Google was offering “Where’s My Water” game for a quarter as well as the novel Extremely Loud & Incredibly Close.

At its developers blog for Android, Google tells publishers that the aim of the new Google Play storefront is to promote their apps and games to a wider audience. The basic infrastructure remains the same for the developers, so nothing changes on the input end. But updates for Android Music, Video and Books apps were rolling out throughout the day, now dubbed Play Music, Play Movies and Play Books respectively. The new apps and infrastructure are compatible with Android 2.2 and up.