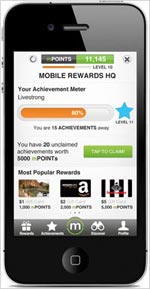 Apple’s iAd platform faces more competition -- from one of its own creators. Lars Albright, who co-founded Quattro Wireless -- snapped up by Apple in 2010 -- helped launch iAd following the merger. Now he has introduced a rival mobile ad offering.

His startup, SessionM, is launching a mobile ad platform that promises to boost engagement rates by investing apps with game-like features that reward users with real-world prizes in return for watching videos or sharing content on Facebook.

Users can earn points through participating apps in the SessionM network, which can be redeemed for exclusive deals and discounts, e-gift cards and other rewards. By interacting with rich media ads within apps, they also have the ability to rack up bonus points and rewards.

SessionM has been testing its new HTML5-based ad system with publishers and advertisers, including Viacom's AddictingGames, The Weather Channel and Glam Media and brands such as Honda, Tyson Foods and Volvo.

Ads run within apps in the SessionM network can be priced on different models, including CPM, cost-per-engagement (CPE), cost-per-click (CPC) or cost-per-install (CPI). “One thing that’s resonated with our advertisers is tying a branding event, whether a mini-game or a video, and then pushing someone down the purchase to interact with something that’s relevant to their brand,” said Albright.

The company has a deal in the works with a major retailer to offer a branded mini-game within ads that will link to a sweepstakes for a sponsored shopping spree. SessionM typically handles rewards management, partnering with Amazon and Foot Locker. Advertisers can also sponsor their own rewards.

The start-up stands to capitalize on any disillusionment with iAd, the in-apps ads system that was supposed to revolutionize mobile advertising but failed to live up to early expectations. Apple recently lowered the minimum buy for iAd advertising to $100,000 from the initial asking price of $1 million at launch in 2010.

For his part, Albright views iAd as complementary to what SessionM is doing.

“We’re using game mechanics tied to mobile commerce and rewards, so it’s a pretty different approach. That said, we’re trying to support what Apple and Google and others have done in trying to make it a richer ecosystem for developers and advertisers in mobile,” he said. Unlike iAd, Albright noted that SessionM is not charging a minimum amount for campaigns.

SessionM isn’t the only company bringing “gamification” to mobile advertising. Companies like Bunchball specialize in building game mechanics into Web sites and apps -- while others, such as TapJoy, provide rewards-based monetization and distribution platforms for developers. Ad networks like Greystripe specialize in inserting rich media ads in gaming and other types of apps.

Still, Albright expressed confidence that there was room for another player. In particular, SessionM aims to extend its platform beyond games to a wide range of categories, including news, sports, entertainment, health and beauty.

Aiding in that effort are SessionM’s high-profile investors: Highland Capital and Kleiner Perkins Caufield & Byer’s iFund. The two VC firms put about $6.7 million behind the company to date.