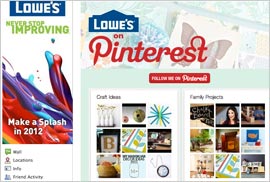 What happens when you pair social media darling Pinterest with Facebook, the undisputed heavyweight of the social networking world?

Lowe’s is hoping for big things as one of the first brands to feature its Pinterest presence in Facebook through a new tool from social marketing firm Vitrue.

Since adding the Pinterest tab on March 1, it has seen a 32% increase in followers of its main Pinterest page to more than 3,100. (Lowe’s has about 1 million Facebook fans, by comparison.) Certain featured boards, focused on topics like family projects, craft ideas, and vacation homes, have seen gains of up to almost 60% in followers.

The uptick underscores the dramatic impact Pinterest is having on publisher and retailer sites more broadly.

New data from Shareholic shows Pinterest drove more referral traffic to other sites than Twitter or Google in February.  Nielsen/NM Incite posted separate findings on Pinterest Thursday, suggesting the social property could be of particular benefit to online retailers, since 92% of its audience also visited mass merchandiser sites in December.

Pinterest’s own monthly traffic doubled to 10 million unique visitors just between October and December last year, with 25- to- 34-year-old users leading the growth surge. Research from Compete shows the Pinterest audience also skews heavily female, with 60% of users being women, as of January.

Lowe’s has been actively cultivating that audience by posting product images tied to home décor and do-it-yourself project ideas on Pinterest since October. Followers can also “pin” their own product pictures (with pricing), video clips and ideas on any of the 25 boards created by the company.

“Pinterest goes beyond simply just sharing or 'liking' things of interest by allowing users to collaborate on various topics. Consumers like to share and show off their projects, big or small,” said Brad Walters, director of social media and emerging platforms at Lowe’s.

Other retailers and brands tapping into the Pinterest audience include Whole Foods, Nordstrom Bergdorf Goodman, HGTV and Real Simple Magazine. In its recent guide to marketing on Pinterest, digital agency 360i recommended the social site as best suited to businesses with target audiences for fashion, food, home goods, and gifts.

Vitrue said it is already working with other clients to add Pinterest tabs to their Facebook pages through its Social Relationship Management platform. The integration includes analytics so brands can track interaction to see what Pinterest content is playing best and how people are interacting with individual pin boards.

One issue: as part of Facebook’s extension of Timeline to brand pages, companies can no longer set default tabs that allow them to control what visitors saw when they came to a page. Lowe’s Facebook page is set so people see the Pinterest content when they open it. But when it's forced to switch to the new Timeline format by the end of March, that will change.

Vitrue would not discuss exactly how it will help Lowe’s drive traffic to the Pinterest tab after the changeover, but brands will have to find other ways of promoting specific content, including using more of the paid media options launched by Facebook last week.